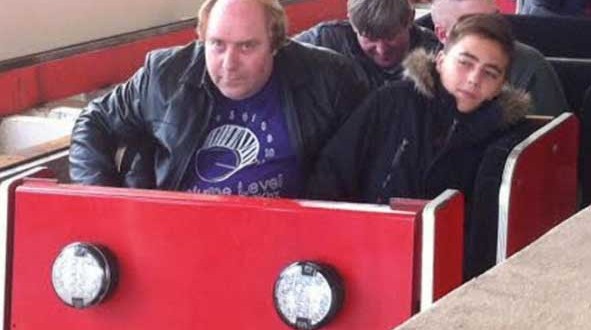 A man has been left fighting for his life in hospital after being paralysed in a freak injury on a ride at Blackpool Pleasure Beach.

Robert Sycamore, 58, is being kept alive by a life support machine at the Royal Preston Hospital after he broke his neck while riding on the Grand National.

Darren Parlour, Mr Sycamore’s nephew and Harry’s father, said: “My son was with him and he’s come back screaming. Rob’s a big bloke and he was down in the footwell of the carriage.

“His ear was on his shoulder and he was totally blue and black. His neck snapped – the muscles collapsed and he’s just melted into the seat.

“I climbed in with Rob and was holding his head so it didn’t move. The emergency services were unbelievable – how he stayed alive, I don’t know.”

Mr Sycamore is currently at Royal Preston Hospital, where he is undergoing further surgery, and is currently relying on a life support machine.

It is thought that Mr Sycamore suffers from spondylitis, inflammation of the vertebrae in the back, although emergency services were unable to confirm whether this was the cause of the accident.

A spokesperson for Blackpool Pleasure Beach, said: “There was an incident on the Grand National in which Richard Sycamore required emergency treatment from the emergency services.

“We do wish Mr Sycamore the earliest recovery and we are in contact with his family.

“Our enquiries have not revealed any faults or problems with the ride.”

Web articles – via partners/network co-ordinators. This website and its contents are the exclusive property of ANGA Media Corporation . We appreciate your feedback and respond to every request. Please fill in the form or send us email to: [email protected]
Previous: Kristin Cavallari’s 20-pound weight loss (Photo)
Next: Toronto : TTC bus driver charged in fatal crash