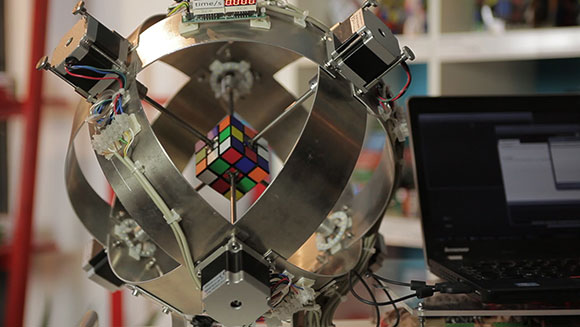 A new Guinness World Record has been set in Germany for the fastest-solved Rubik’s cube by a robot, which unscrambled the puzzle in just 0.637 seconds with 21 moves.

The previous record of 0.887 seconds was actually set by an older version of the same robot, suggesting that, despite the efforts of others, the Sub1 has the solving-the-Rubik’s-Cube game utterly sewn up.

In the video, you can watch the robot complete the Cube in just 21 turns. The clip also shows the feat in slow-motion so you can actually see the robot at work.

What makes the achievement all the more remarkable is that the record includes the time it took Sub1 Reloaded to analyze the position of the stickers at the very start. So the attempt begins when the assistant presses the button, which activates the sensors.

It’s worth noting that the Rubik’s Cube isn’t the precise version we’re all familiar with, because if that were the case we just know it’d jam every couple of rotations. So the team built a so-called “speed cube” that’s able to turn without any issues.

Infineon hopes the achievement of its robot will help highlight the ability and speed of its technology, which it says is ideal for self-driving vehicles.

“The microcontroller can react to events in a very short and deterministic timeframe, which is extremely important in the automotive area,” Infineon’s Peter Schafer told the FT last year.

And yes, humans do have a bit of work to do to catch Sub1 Reloaded. Guinness World Records currently lists Australian student Feliks Zemdegs as the human record holder for solving the Cube in 4.73 seconds. Zemdegs set the record in December, 2016, shaving one hundredth of a second off the previous record, which had been set just five weeks earlier.

Web articles – via partners/network co-ordinators. This website and its contents are the exclusive property of ANGA Media Corporation . We appreciate your feedback and respond to every request. Please fill in the form or send us email to: [email protected]
Previous: Squamish RCMP look for suspects in $500K theft
Next: Researchers to create artificial magnetosphere for Mars