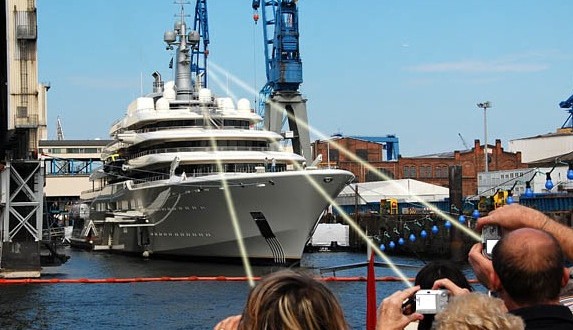 Earlier this month, we featured an upcoming license plate frame that uses bright flashes of light to prevent traffic enforcement photographs. In the article, we mentioned that the concept could potentially be used by the rich and famous to avoid the constant gaze of paparazzi cameras. Turns out the rich and famous are already one step ahead of us. Eclipse, the world’s largest private yacht owned by Russian billionaire Roman Abramovich, already features a high-tech anti-photography system that uses lasers to seek out and deny cameras.

According to The Times, which broke the story at the time, the “shield” can be easily switched off to allow special guests the opportunity to snap personal photographs. Only when paparazzi are spotted is the system flipped on.

After news of the photo-defense system started spreading, Amateur Photographer asked a couple of lawyers about the legality of such a device. While they didn’t arrive at a conclusive answer, the main questions are whether there is a “reasonable expectation of privacy” while floating around in a yacht and whether the shield inflicts any damage upon cameras and/or photographers.

One thing’s for sure, though: Eclipse isn’t going to get ticketed by a traffic enforcement camera anytime soon.

Web articles – via partners/network co-ordinators. This website and its contents are the exclusive property of ANGA Media Corporation . We appreciate your feedback and respond to every request. Please fill in the form or send us email to: [email protected]
Previous: Baby Einstein activity jumper Recall : 100 reports of incidents including 61 injuries
Next: Richard branson sells $200,000 tickets for flights to outer space (VIDEO)