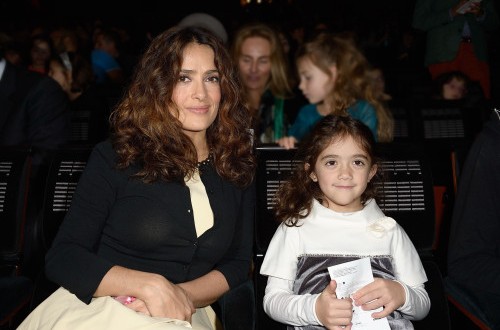 Last month the actress shared that her 6-year-old thinks she’s a hero for being in the upcoming Muppets Most Wanted movie.

Salma has been busy with her recent gig “How to Make Love Like an Englishman” along with costars Pierce Brosnan and Jessica Alba in Malibu, California.

And now it sounds like she and husband Francois-Henri Pinault are seeking some luxurious digs in the English capitol city. A spokesperson told press, “Francois-Henri Pinault and Salma Hayek intend to rent a house in London, where Hayek already spends a lot of time, especially for her film career. Pinault will not be domiciled in the UK and remains a French resident.”

Web articles – via partners/network co-ordinators. This website and its contents are the exclusive property of ANGA Media Corporation . We appreciate your feedback and respond to every request. Please fill in the form or send us email to: [email protected]
Previous: Business digest : Men’s Wearhouse Gets Hostile With Jos. A. Bank
Next: Pop star Jennifer Lopez’s new video to premiere soon?