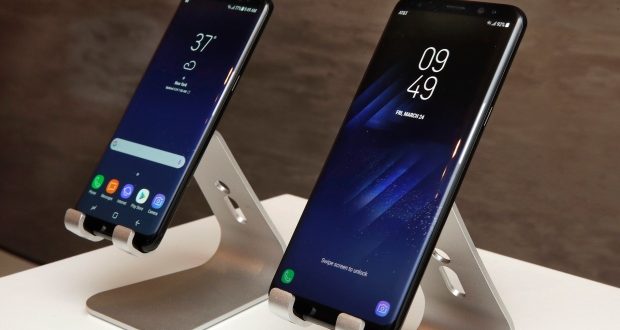 The Samsung Galaxy S8 is already available to pre-order in Canada, with launch set for April 21. But those who pre-order early will get their unit as soon as April 17. Specifically, Telus has confirmed that “deliveries will start as early as April 17th.”

As expected, the S8 comes in two sizes with a curved edge-to-edge 5.8-inch or 6.2-inch QHD AMOLED display. The always-on 18.5:9 ratio screen has a HDR-enabled 2960×1440 resolution within a minimal bezel design that replaces the physical home button with a virtual force touch button embedded in the screen, and moves the fingerprint sensor to the rear of the device, alongside the camera.

The rear camera features a 12 megapixel f/1.7 lens, while an 8 megapixel f/1.7 camera with autofocus sits above the screen on the front. Samsung has also integrated iris scanning and facial recognition into the front camera to make unlocking the phone and signing into websites easier.

On the right side of the handset is the power button, while the left side houses volume controls and a separate button to activate Bixby, Samsung’s new context-aware virtual assistant, developed by the original creators of Siri. Harman Kardon stereo speakers are visible on the bottom of the device, along with a USB-C port and a headphone jack.

Inside, the S8 features a Snapdragon 835 processor, a 10 nanometer chip made in partnership by Qualcomm and Samsung. Paired with the chip is 4GB of RAM and 64GB or 128GB of storage with microSD support for up to 256GB. The standard model has a 3,000mAh battery, while the Plus device gets 3,500mAh. Both models support fast wireless charging.

On the software side, the S8 runs Android 7.0 and has a Bluetooth dual audio feature that lets users stream audio to two separate headsets or speakers at the same time. There’s also a multi-window feature that enables two apps to run on the screen simultaneously. Another feature Samsung is debuting with the S8 is Samsung DeX, which allows users to connect the phone to an external display, keyboard, and mouse, to use the operating system like a computer.

The 5.8-inch Galaxy S8 price starts at $750, while the 6.2-inch 8+ device starts at $850. Prices may vary. Both handsets are waterproof to IP68 standard and come in Midnight Black, Orchid Gray, and Arctic Silver colorways. Pre-orders begin on March 30 and include a Gear VR headset with touch controller. Both handsets will go on sale online and in stores in the U.S., Canada, and across Europe on April 21.

The pieces are finally starting to come together for what should be a remarkable battle of the smartphones this year. Apple’s widely rumored high-end redesigned iPhone with a 5.8-inch edge-to-edge OLED display will likely launch in September, although the majority of stock may not be available until later in the fourth quarter.

SaskTel’s pre-orders are already up and running. Simply head to their web page to fill out the form. The carrier is also offering a free gift-with-purchase of a Samsung Gear VR with Controller (retail value of $199 CAD), while supplies last. The carrier is offering the S8 and S8+ in Midnight Black and Orchid Grey with a 64GB storage option only.

Check out the offer here.

The Quebec regional carrier has announced that pre-orders begin tomorrow, March 30th. Videotron will offer the Samsung Galaxy S8 and S8+, both in Midnight Black and Orchid Grey.

Customers that pre-order will receive a free Samsung Gear VR with Controller, a value of $199. Additionally, the site says the handset will be available to “preview” tomorrow — perhaps indicating that it will be live in stores for customers to take on a test drive.

Bell customers can pre-order the 64GB Samsung Galaxy S8 for $489.99 and Samsung Galaxy S8+ for $559.99 on two-year plans beginning immediately. All pre-orders include a Gear VR gift (valued at $200) with purchase at no additional cost. The same deal goes for Bell MTS.

Watch out for further details here.

Telus has the Galaxy S8 and S8+ available to pre-order in Orchid Grey and Midnight Black with only the 64GB variant. Those who pre-order can get a Gear VR (valued at about $200).

The operator says deliveries will start as early as April 17th.

Pre-orders open March 30th, with Rogers offering the Samsung Gear VR with controller (value $200) as a gift with promotion, plus six months of Netflix for free. Pricing is $1,035 with no term for the S8, $249 down on select two-year terms. For the S8+, pricing is $1,115 and $319 for select two-year terms. The carrier also notes that customers who pre-order the S8 can pick it up in-store as early as April 17th.

Look out for further details here.

Those who pre-order with Koodo can get a free Gear VR. The Galaxy S8 is available only in black at 64GB internal storage. Its pricing starts at $490 down on a 24-month Tab Large (the most subsidized option). The Galaxy S8+, available online only, comes in Midnight Black or Orchid Grey at 64GB internal storage. Pricing for the plus-sized version starts at $560 on a 24-month Tab Large.

Virgin Mobile’s S8 pre-orders are now open, offering its customers the 64GB Samsung Galaxy S8 starting at $489.99 on a two-year Platinum plan. Customers can pre-order the phone in Midnight Black or Orchid Gray immediately at Virgin Mobile stores and national retail locations. Online orders on virginmobile.ca will be available later in the afternoon of March 29th. All pre-orders include a Gear VR gift (valued at about $200) with purchase at no additional cost.

Pre-orders for the S8 and S8+ in either Midnight Black or Orchid Grey begin March 31st and go through April 20th, with the carrier offering a Gear VR headset and controller (valued at about $200) as an accompanying gift. Freedom has also confirmed to MobileSyrup that the devices work on its new Band 66 LTE network. Pricing for the S8 outright is $999, while the S8+ is $1,099.

Pre-orders at Eastlink are now live for the Samsung Galaxy S8 and S8+. Anyone who pre-orders between March 29th and April 20th will receive a free Gear VR with controller, valued at $199. This offer is available for new activations and hardware upgrades. The regional east coast operator is offering both the Galaxy S8 and S8+ for $0 down with easyTab.

Best Buy Canada is offering pre-orders through Koodo, SaskTel, Virgin, Fido, Bell, Tbaytel and Rogers, and promises a free $200 value Gear VR headset when activating on certain two-year plans. Currently all devices are listed at $489.99 on a two-year agreement and though pre-orders are tagged as open, none of the devices appear to be available yet.

Web articles – via partners/network co-ordinators. This website and its contents are the exclusive property of ANGA Media Corporation . We appreciate your feedback and respond to every request. Please fill in the form or send us email to: [email protected]
Previous: A Skyscraper That Will Be Hanging From An Asteroid (Photo)
Next: US Woman crashes into police cruiser outside the US Capitol