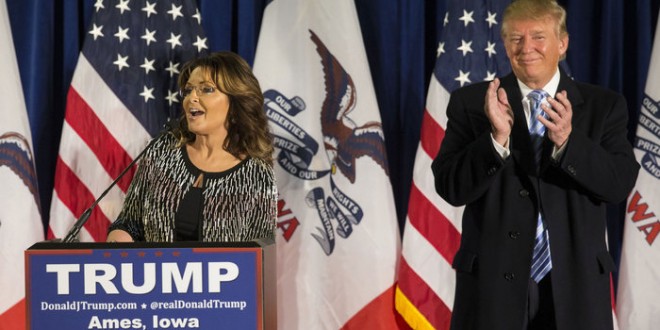 Sarah Palin endorsed Donald Trump for president while in Iowa on Tuesday.

After a day of mounting speculation, the Republicans’ 2008 vice presidential candidate, made her appearance in person at an evening campaign event and confirmed she was was backing the tycoon and frontrunner.

“I’m in it to win it,” Sarah Palin said, standing next to Mr Trump, who stood and grinned. “He is going rogue left and right,” she said, harkening back to a description she tried to own when running for Vice President in 2008.

“Palin’s brand among evangelicals is as gold as the faucets in Trump tower,” said Ralph Reed, the chairman of the Faith & Freedom Coalition.

She emphasised the promise of Mr Trump especially as Commander-in-Chief and protector of America against its enemies, notably Iran. “We are ready for a change, and our troops deserve the best, a new commander-in-chef, whose track record of success proves he is the master of the art of the deal”

Galloping on, she went on: “He is beholden to no one but we the people, how refreshing he is. No more pussyfooting around, our troops deserve the better.

Mr Trump concluded the event by saying, that he knew if he was going to become president, he had to have the support of “Sarah”.

Speculation has been growing about the identity of the special guest since Mr Trump told New Hampshire voters on Monday that he would be getting a “big endorsement” on Tuesday.

Sarah Palin, the Republicans’ 2008 vice presidential candidate, had backed Ted Cruz’s campaign for the senate. Yet she has repeatedly praised Mr Trump during his White House run, especially over his recent proposal to suspend the admission of Muslim refugees to the US.

She said last month: “What a nice problem to have if it came down to Cruz and Trump.”

Though Sarah Palin was a deeply controversial choice to be Senator John McCain’s running mate in 2008, she remains hugely popular among some groups of American conservatives. She is a favourite of the pro-small government Tea Party community within the party, the same constituency Mr Cruz has been seeking to appeal to.

Indeed, speculation that the former Alaska governor was going to endorse Mr Trump intensified when a senior aide to Mr Cruz said he would be “deeply disappointed” if she did so.

Mr Cruz communications director, Rick Tyler, was asked on CNN whether such an endorsement would be a blow to the senator’s campaign.

“I think it would be a blow to Sarah Palin, because Sarah Palin has been a champion of the conservative cause and if she was going to endorse Donald Trump, sadly she would be endorsing someone who’s held progressive views all their life on the sanctity of life, on marriage, on partial-birth abortion,

“She supported the TARP bailout – it goes on and on and on,” said Mr Tyler.

“Donald Trump claims he’s changed all those views. But I think if it was Sarah Palin, let me just say I would be deeply disappointed.”

Earlier on Tuesday, Mr Trump stopped off at the John Wayne Birthplace Museum, where he received another endorsement, that one from the film actor’s daughter.

The backing of Aissa Wayne was announced in front of a life-size, gun-toting model of the actor in full cowboy gear. Ms Wayne says the country needs a strong and courageous leader like her father and that her father would back Mr Trump if he were still alive.

“I only met him once. He was amazing,” said Mr Trump. “He said some things to me that were very special.”

Mr Trump said the actor represented strength and power, things that the American people are looking for.

He added: “We have exactly the opposite from John Wayne right now in this country.”

Web articles – via partners/network co-ordinators. This website and its contents are the exclusive property of ANGA Media Corporation . We appreciate your feedback and respond to every request. Please fill in the form or send us email to: [email protected]
Previous: Ottawa joins provinces to negotiate lower prescription drug prices, Report
Next: Worst Passwords of 2015: ‘Starwars’ joins ‘letmein’; ‘monkey’ & ‘123456’ in list