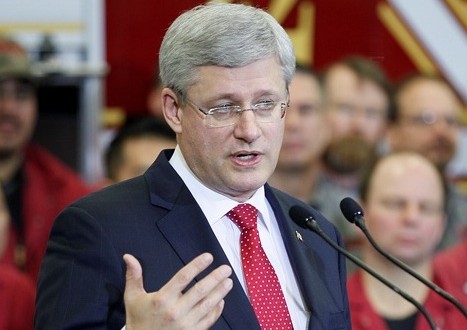 Prime Minister Stephen Harper ducked questions Friday over a “culture” in his own office that led his staff to try to alter an independent audit earlier this year into Sen. Mike Duffy’s housing expenses.

Instead, Harper stuck to a line he has used throughout the growing Senate expense scandal — putting the blame on just Duffy and his former chief of staff, Nigel Wright.

Harper’s comments came Friday during a trip for a highway funding announcement in Manitoba, where there are two byelections early next week.

Harper couldn’t escape continued questions from journalists, after the release of an RCMP report this week which showed several people in the prime minister’s office, and one senator, were aware of a secret scheme to have Wright repay Duffy’s expenses.

According to the court filing, Gerstein told the RCMP he called Runia to ask “if there was anything he could share with him regarding the status of their audit.”

“Mr. Runia advised him that he did not know anything about it, but would inquire,” the document says. “Sen. Gerstein related this to (PMO staffer) Patrick Rogers.”

Court documents allege Gerstein initially agreed to dip into the fund to repay Duffy’s ineligible expenses when they were thought to be $32,000, but later balked when they were revealed to be upwards of $90,000.

The RCMP also quotes a March 8 email from Rogers that mentions Gerstein and his Deloitte contact.

“Sen. Gerstein has just called. He agreed with our understanding of the situation and his Deloitte contact agrees,” Rogers wrote.

“The stage we’re at now is waiting for the senator’s contact to get the actual Deloitte auditor on the file to agree. The senator will call back once we have Deloitte locked in.”

“It’s like they feel as if someone calls from the Prime Minister’s Office and puts the squeeze on that they’re going to get their way,” he said.

On March 21, Rogers gave Wright an update from Gerstein.

“Any repayments will not change Deloitte’s conclusions because they were asked to opine on residency,” he wrote.

“However, they can’t reach a conclusion on residency because Duffy’s lawyer has not provided them anything.”

The Senate released the Deloitte audit on May 9 along with its own report into housing claims. Deloitte found that while Duffy, Brazeau and Harb live in the Ottawa area, the rules and guidelines for housing claims are unclear, making it difficult to say categorically that anyone broke the rules.

Web articles – via partners/network co-ordinators. This website and its contents are the exclusive property of ANGA Media Corporation . We appreciate your feedback and respond to every request. Please fill in the form or send us email to: [email protected]
Previous: Black Widows in Grapes : Giant customer finds spider in produce
Next: Greenland shark : choking on moose hide rescued in eastern Canada (PHOTO)