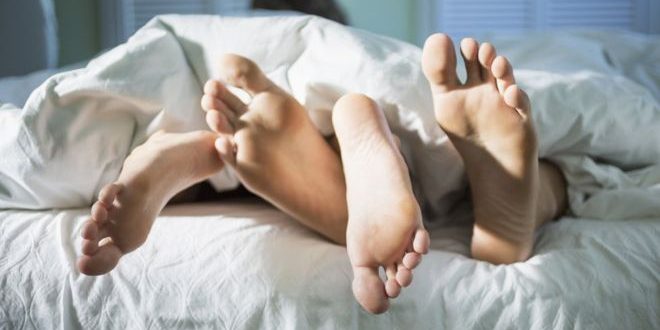 Doctors are happy to announce that sex is not a risk factor for sudden cardiac arrest, a study says.

The research found that only about 1 in 100 deaths from sudden cardiac arrest in men and about 1 in 1,000 of such deaths in women could be linked to sexual activity.

That’s less than 1 percent of all deaths from sudden cardiac arrest.

“People will ask their doctors if sex increases their risk of sudden death, and we’ve never had the answer before because there never was a study,” said Dr. Sumeet Chugh, the study’s senior author and a cardiologist at the Cedars-Sinai Medical Center in Los Angeles, in a released statement. “Over the years, we’ve had a fair bit of data on physical activity and how it’s related to sudden cardiac arrest, but no one had looked specifically at sexual activity. The risk is very small.”

Sudden cardiac arrest occurs when the heart experiences an electrical malfunction and suddenly stops beating, shutting off blood flow to the brain and other organs. The person loses consciousness and ceases breathing. Death usually results if CPR is not begun — and is not successful at restarting the heart — within minutes.

Each year, more than 350,000 American adults have a sudden cardiac arrest that occurs outside of a hospital, and 90 percent of those people are not revived, according to the American Heart Association.

Past research has linked physical activity — especially activity that’s not part of a person’s regular routine — with an increased risk of sudden cardiac arrest. The current study is, however, the first one to examine sexual activity as a potential trigger for these devastating heart events.

For their study, Chugh and his colleagues used data from the Oregon Sudden Unexpected Death Study, which has been collecting information on sudden cardiac arrest cases in the Portland metropolitan area since 2002. The researchers identified 4,525 cases between 2002 and 2012 that had enough information to determine whether sexual activity had preceded the stoppage of the person’s heartbeat. The age range of the people in those cases was 34 to 83.

Only 34 of those sudden cardiac arrests — 0.7 percent — occurred during or within an hour of the person engaging in sex.

Most — 32 of the cases — involved men with a previous history of various heart diseases. They were particularly more likely to have had a history of a higher-than-normal heart rate (tachycardia) or a serious heart-rhythm disturbance known as ventricular fibrillation.

The importance of CPR

The study’s findings also underscore the importance of knowing CPR.

More of the individuals who experienced a sex-related sudden cardiac arrest survived the event than those whose heart stopped in other situations (19 percent versus 13 percent), but that difference wasn’t significant, the researchers stress.

What was significant — and troubling — was that bystanders performed CPR in only about a third of the cases.

Web articles – via partners/network co-ordinators. This website and its contents are the exclusive property of ANGA Media Corporation . We appreciate your feedback and respond to every request. Please fill in the form or send us email to: [email protected]
Previous: Astronomers discover ‘near neighbour’ to Earth which may have life
Next: How Dark Matter Works? Another candidate has been ruled out, narrowing the search