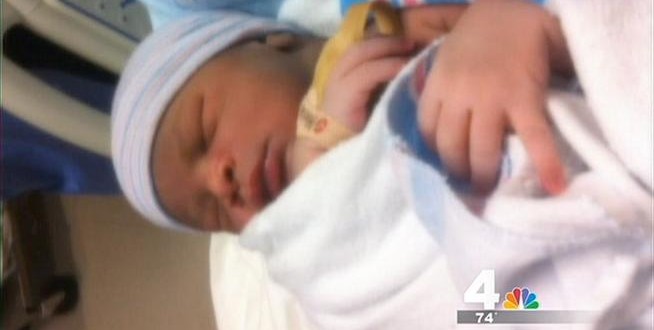 Those were indeed the cries of a newborn baby on the platform at the L’Enfant Plaza Metro Station Thursday morning.

The baby boy showed up two weeks early. His mom was on her way to a doctor’s appointment at the time.

Amir was born moments after his 23-year-old mother hopped off an inbound Green Line train just before 11 a.m. Thursday.

Shavonnte Taylor was on her way to the George Washington University Hospital for that appointment when she went into labor.

Metro station manager Saa Alpha was right there when it happened.

“It popped right out,” he says. “It was like she was a quarterback. Popped it right out.”

Alpha says off-duty EMT Autumn Manka was among the riders who pitched in.

“One customer took his shirt off and gave it to the EMT to help clean up,” he says. “It was just awesome. Nervous, excited.”

“Our thanks to all those involved who helped deliver this healthy baby today,” says Metro spokesperson Caroline Lukas.

Manka, the EMT, says she was heading into the District from her home in Dumfries, Md., to do some sightseeing.

She says she is new to the area and did her EMT training while her husband was deployed overseas.

In an interesting coincidence L’Enfant means “the child” in French. And Pierre L’Enfant’s b-day is Aug 2! #MetroBabyName #WMATA #unsuckdcmetro

Metro Transit Police @MetroTransitPD tweeted at 10:48 a.m. “A baby was just delivered ON THE PLATFORM at L’Enfant Plaza. MTPD on scene. Additional details will follow. #WMATA”

Web articles – via partners/network co-ordinators. This website and its contents are the exclusive property of ANGA Media Corporation . We appreciate your feedback and respond to every request. Please fill in the form or send us email to: [email protected]
Previous: “He was from Alabama,” “He was raised on potatoes.”
Next: Tony dorsett : What is ‘CTE’ all about?