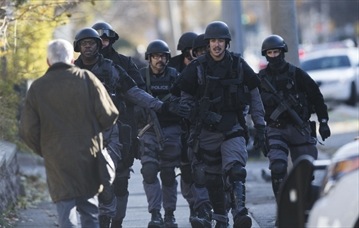 One man is dead following a police stand-off on Sherbourne St.

Kim McKinnon of Toronto EMS said a middle-aged man was pronounced dead at the scene, centred at 437 Sherbourne St. She couldn’t confirm if it was the suspect and if he was shot at, or if the shots were self-inflicted.

Police were called to the scene at 12:30 p.m. Const. Wendy Drummond said the suspect was “armed with a gun and he was pointing it at officers.”

Two loud noises were heard at 1:45 p.m., but police couldn’t confirm if the sounds were gunshots.

EMS workers could be seen entering the alleyway with a gurney, and loading a person into the ambulance. At 2:15 p.m., McKinnon said they were still on the scene.

Police have advised the public to use caution and avoid the area.

Web articles – via partners/network co-ordinators. This website and its contents are the exclusive property of ANGA Media Corporation . We appreciate your feedback and respond to every request. Please fill in the form or send us email to: [email protected]
Previous: Lil’ Kim accused : Rapper May Be Facing Lawsuit For Allegedly Stealing Selfie Pic
Next: 220 pounds of cocaine found in bananas : shipment to Danish