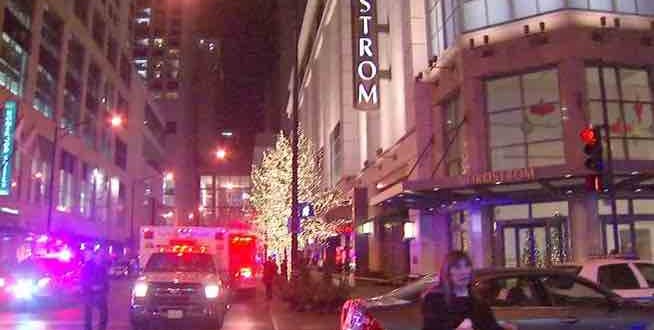 One dead, another critical after shooting in Chicago Nordstrom, A man was killed and a woman was taken to Northwestern Memorial Hospital in critical condition, fire officials said.

The man, who was the current or ex-boyfriend of the woman, shot her before turning the gun on himself, Chicago Police Chief of Detectives John J. Escalante said. The woman was a seasonal employee at the store, Escalante said.

A representative for Nordstrom could not be reached Friday night.

Tourists from Singapore told the Chicago Sun-Times they were in the mall and heard two loud noises — what they think were shots.

“Does this normally happen on Black Friday?” the 34-year-old man asked. He and his travel companion asked not to be identified.

The pair said they said a rush of people run out of Nordstrom, looking panicked.

“They were scared,” the man said.

“I didn’t quite believe it,” said his 31-year-old travel companion.

“What an experience,” she said. “Welcome to America.”

Bob Rogers, who was outside the store, said people came out of the store shaken up, the Sun-Times is reporting.

Of the shooting he said, “it can happen anywhere.”

“You feel sorry for the people,” he said.

Crime scene tape was set up around the Nordstrom at 55 E. Grand, and police officers could be seen going in and out of the store.

Web articles – via partners/network co-ordinators. This website and its contents are the exclusive property of ANGA Media Corporation . We appreciate your feedback and respond to every request. Please fill in the form or send us email to: [email protected]
Previous: Scientists warn against Facebook, Twitter data
Next: Scientists unearth new clues about ancient ‘computer’