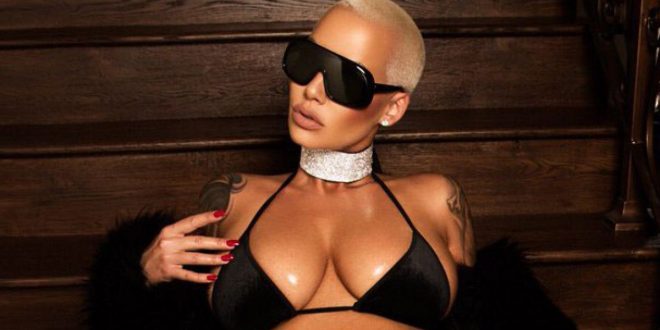 Amber Rose doesn’t make the headlines as often as she used to, but unsurprisingly, posing with absolutely nothing on her bottom half has managed it.

The 33-year-old shocked social media users when she posted a picture on Saturday (10Jun17) showing her reclining on a wooden staircase wearing only a bikini top and an open black coat, putting her oiled-up body and vagina on full display.

She uploaded the snap on Twitter and Instagram to promote her annual SlutWalk, a feminist march which is set to take place in Los Angeles on 1 October (17).

Amber later took to Instagram to post a video of her rolling her eyes and then smiling, while lying in bed.

In the caption, she wrote, “When IG (Instagram) deletes ur (your) fire a*s feminist post but you really don’t give a f**k because everyone picked it up already #amberroseslutwalk,” and jokingly referred to her grooming preferences with the hashtag “#bringbackthebush.”

The model is known for posting risque snaps on her social media accounts and when one user suggested last month (May17) she acted like more of a role model to her young children, who follow her, Amber hit back, writing, “The nicest way I can put it is….. RAISE YOUR OWN KIDS!!!”

She continued, “Stop looking for famous people to influence your children. I am not a role model to ur (your) kids… I would never have my kid (even as a teenager) follow a 33-year-old grown woman on Social media. I filter everything that he watched and I will continue to do so until he’s an adult and he is able to make his own decisions. You should do the same.”

Amber is mother to a four-year-old son named Sebastian, whom she shares with rapper ex-husband Wiz Khalifa.

Web articles – via partners/network co-ordinators. This website and its contents are the exclusive property of ANGA Media Corporation . We appreciate your feedback and respond to every request. Please fill in the form or send us email to: [email protected]
Previous: Kids who don’t drink cow’s milk are shorter, says new study
Next: Scientists discover a 2-D magnet (research)