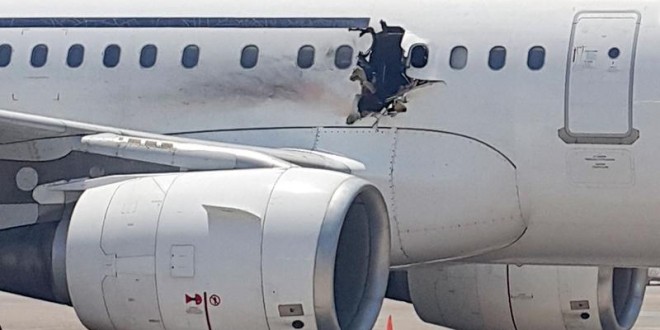 An explosion on a Somali plane was likely caused by a bomb, US investigators have said.

The passenger plane was forced to make an emergency landing on Tuesday after a huge hole was blown in its side.

The Daallo Airlines flight D3159 was en route to Djibouti from Somalia after suspected bomb blasted a hole through the side of the board or fuselage just five minutes after the aircraft took off from Mogadishu airport, Air Transport and Civil Aviation Minister Ali Ahmed Jama said.

Jama said the government has launched investigations into the explosion, confirming that two passengers were injured while one was still missing.

“An explosion happened inside the Airbus D3159 belonging to Daalo Airline company, two people were injured, one is missing, but security forces have launched investigations to establish the cause,” Jama told journalists late on Tuesday.

However, witnesses said at least one person was blown out of the aircraft by the impact of the explosion. Jama said the plane which was at between 10,000-14,000 feet was forced to return to Mogadishu’s airport after a bang was heard on board, sparking fire.

“The pilot requested us to land and we accepted and later extended assistance to passengers,” Jama said, adding that investigations are under way to determine the cause.

Ali Abdi Wardhere who was one of the passengers on board said the injured people were rushed to the AMISOM hospital while one passenger went missing.

“The missing passenger is reported to have fallen and found in Bal’ad district in Middle Shabelle region, I thank the Somali government for how they managed to rescue,” he added.

Sources said the missing person could be the one main suspect behind the blast as he was blown up by the explosion.

Daallo Airlines flies regularly between Mogadishu and cities including Djibouti and Jeddah in Saudi Arabia.

Web articles – via partners/network co-ordinators. This website and its contents are the exclusive property of ANGA Media Corporation . We appreciate your feedback and respond to every request. Please fill in the form or send us email to: [email protected]
Previous: Ontario adopts new PTSD strategy for first responders, Report
Next: Lady Gaga to perform David Bowie tribute at the Grammys 2016