Home » World » Speeding Lamborghini spins out on BC highway (Video) 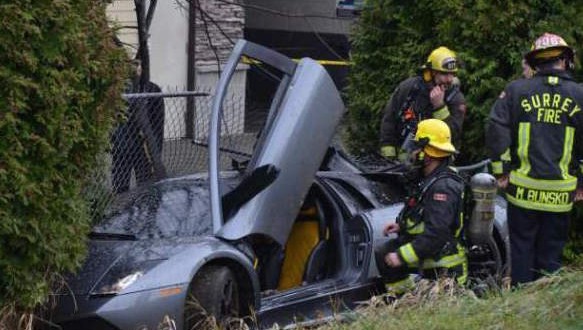 Speeding Lamborghini spins out on BC highway (Video)

Speeding Lamborghini spins out on BC highway (Video)

A driver put a little too much pedal to the metal on Sunday when a Lamborghini sped out of control on Highway 99.

A nearby driver had a dash camera rolling when the Lamborghini sails by, followed by a Dodge Viper. Surrey RCMP say the 27-year old driver and his 19-year old passenger, both from Edmonton, were standing outside the car when emergency crews arrived, according to CBC News in Vancouver. They appeared to be in shock but otherwise unhurt.

The car, worth around $240,000, was totaled. In addition to having to replace the car, the driver was also fined several hundred dollars in traffic infractions.

Web articles – via partners/network co-ordinators. This website and its contents are the exclusive property of ANGA Media Corporation . We appreciate your feedback and respond to every request. Please fill in the form or send us email to: [email protected]
Previous: Tracking Santa 2014 : Follow Santa’s Journey Around the Globe
Next: Pennsylvania Cheer mom charged with having sex with 17-year-old in car