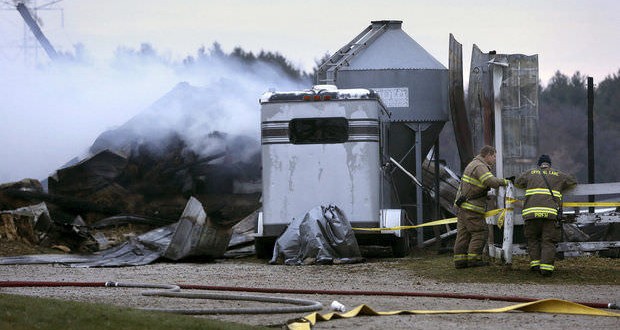 Over 30 horses have died after a fire broke out in a stable near Chicago, despite the facility owners’ efforts to lead the animals to safety.

The Chicago Tribune reported that the son of the stable’s owners woke up to an “awkward sound” Saturday after coming home from a banquet. After the son woke up, he found that the stable was on fire.

Stable owner Amber Bauman told the Trib, “Imagine being 15 and seeing something like that. This is all my kids know, and it’s gone.”

The Northwest Herald reports that the stable where the fire reportedly occurred, Valley View Acres, sold the horse who portrayed Silver in the Johnny Depp remake of The Lone Ranger.

The Herald lays out the tragic scene:

The first firefighters arrived on scene at 10:53 p.m. and reported heavy smoke and fire coming from a large, T-shaped stable. Because of a lack of fire hydrants in the area, Crystal Lake activated a Mutual Aid Box Alarm System. More than a dozen area departments rendered aid.

Fire officials said they were able to get the fire under control at 12:30 a.m. Sunday. The owner of the stable said there were up to 37 horses in the stable and five were found later in a nearby field.

The firefighter who was injured during the fire was later treated and released from a local hospital. The Chicago Sun-Times reports that the loss from the fire estimates to be about $1 million, according to Crystal Lake Fire Rescue Chief Paul Deraedt, who also said each horse was worth about “about $50,000 to $75,000.”

The fire, the cause of which remains under investigation by authorities, was finally put out two hours after it reportedly started.

Web articles – via partners/network co-ordinators. This website and its contents are the exclusive property of ANGA Media Corporation . We appreciate your feedback and respond to every request. Please fill in the form or send us email to: [email protected]
Previous: ‘Jurassic World’ trailer: Dinosaurs and Pratt (Watch)
Next: Vancouver Aquarium harbour seal dies after getting caught in drain