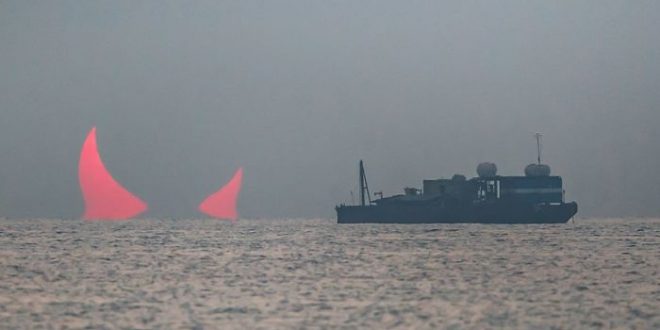 A photographer in the Persian Gulf has managed to capture an incredible shot of sunrise that appears to look like two gigantic devil horns emerging from the horizon during a rare solar eclipse.

The photographer shared a series of pictures in which the sun appears in different shapes before taking the shape of a crimson crescent.

The sun was partially obscured by the moon as it passed during the eclipse. Incredibly, the eclipse also occurred at sunrise when the sky was deep red.

The shots were taken by photographer Elias Chasiotis, who had planned to take pictures of the eclipse as it happened but got way more than he bargained for.

The eclipse coupled with the mirage effects on the ocean surface gave the sunrise an ‘evil’ appearance.

“I hoped that optical effects like inferior mirage would be visible and I was lucky enough to capture them. I was worried that nothing would come out of the eclipse. However, when the sun finally began to rise, it looked like two separate pieces, some sort of red horns piercing the sea,” Elias told Bored Panda.

“It soon took the form of a crescent, with the so-called ‘Etruscan vase’ inferior mirage effect visible. Due to its shape, the phenomenon was nicknamed the ‘evil sunrise,” he added.

The effect Elias captured on his camera is called Fata Morgana. It occurs when the light appears to bend as it passes through layers of air. This phenomenon can be seen in a lot of desert footages.

Web articles – via partners/network co-ordinators. This website and its contents are the exclusive property of ANGA Media Corporation . We appreciate your feedback and respond to every request. Please fill in the form or send us email to: [email protected]
Previous: Slovenia Trump statue Destroyed in Fire
Next: Pharmacy robber sick child, ‘Give me all the money’