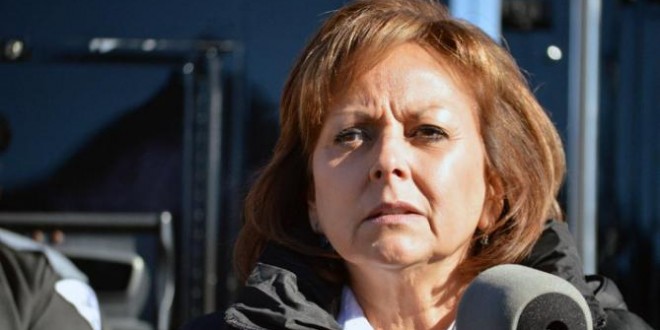 Susana Martinez reportedly called Santa Fe dispatchers after a noise complaint was made against her room at a Santa Fe hotel during her office’s holiday party Sunday and told police they weren’t needed, according to dispatch recordings obtained by the Santa Fe New Mexican.

Santa Fe police were dispatched to Gov. Susana Martinez’s hotel room at the Eldorado Hotel & Spa about 1:30 a.m. Sunday after a caller complained of loud noises emanating from the room and someone throwing bottles off the balcony.

It seems that it was an hotel employee who placed the complaint call and that the governor became “at times impatient” with the dispatcher.

The governor said she and her disabled sister were in the room, along with six other people eating pizza. She said they were not making noise. If there was a disturbance in the room, she tells the dispatcher, it would have happened about six hours earlier, but does not provide further explanation in the recording.

Martinez tells the dispatcher who she is, and then asks who complained. The dispatcher tells her he can’t give her that information.

“Why can you not? It is public record,” Martinez responds. “Give it to me.” Her tone was occasionally impatient.

She insists on knowing who made the complaint and asks if it was another guest in the hotel.

“What room number?” she asks. “Are they next door?”

A dispatch log said a complaint was made about guests “partying” in a room on the fourth floor. “Caller adv they were warned to stop / They haven’t / Caller would like them escorted off the property,” the shorthand notes of the log say.

The person mentioned in the log as the caller was a hotel employee.

KRQE reports that Martinez told the dispatcher to “call off” the police and notes that the Santa Fe interim police chief was in attendance at the party:

The Santa Fe officers did not attempt to contact the hotel guest who made the complaint, nor did they go up to the governor’s fourth-floor room to investigate further. Ross said the officers made a sweep of the outside of the building to look for evidence of broken bottles, but found nothing.

Santa Fe’s interim police chief, Patrick Gallagher, was at the holiday party as an invited guest. Ross said the chief was not notified of the call until Monday morning.

Web articles – via partners/network co-ordinators. This website and its contents are the exclusive property of ANGA Media Corporation . We appreciate your feedback and respond to every request. Please fill in the form or send us email to: [email protected]
Previous: Rebecca Dunbar gets backlash for breastfeeding baby on Santa’s lap
Next: Wolf 1061c: Closest potentially habitable planet found just 14 light years away