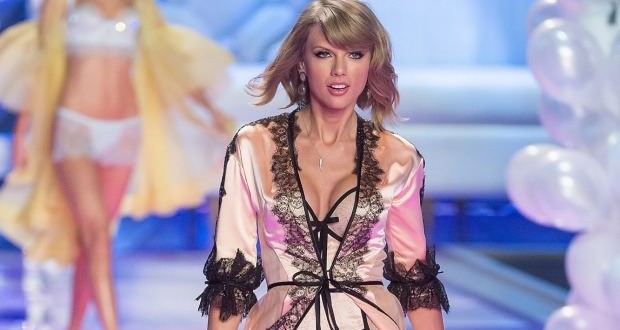 Taylor Swift might not be in the good books with the good people of Perth but in the motherland she was crowned queen of the catwalk at the 2014 Victoria’s Secret show in London.

The Blank Space singer stole the annual lingerie fashion show, where she performed alongside the 47 models and her best friend, Victoria’s Secret angel Karlie Kloss, wearing a number of racy and lacy ensembles. A far cry from the cowboy boots and sun dress combination she rocked before releasing her latest album, 1989.

The 47 models were showing off the brand’s most extravagant creations, including jewel-encrusted bras worth more than £1million each and “angel wings” made of gold. Pictured here is Namibian model Behati Prinsloo, who is married to Maroon 5 frontman Adam Levine.

Model Lily Aldridge called it a “little slumber party that we get to have in London” — albeit an expensive and slickly managed one.

Held in a different location every year, the brand’s annual lingerie show features some of the world’s most beautiful women modelling the American smalls.

The finale always features the supermodels in the giant wingss – and this year was no different with a host of the models strutting their stuff complete with angel wings.

Opting out of her usual cat-ear accessories, the star looked incredible as she took to the stage in a black bra and pant set, giving the professional models a run for their money.

Taylor, who shared the stage with model pals Karlie Kloss and Lily Aldridge, changed from a silky outfit into a see-through black negligee with underwear underneath and a saucy camisole outfit for the second of her performances.

Swift’s friend Ed Sheeran also performed as part of the first Victoria’s Secret fashion show in London, but he resisted the urge of revealing too much, donning a shirt and tie for his set.

Meanwhile, prior to the big show, Grande stunned fans waiting in the cold outside The Langham Hotel, where she was staying, hoping for a glimpse of the singer, by sending them trays of hot chocolate to keep them warm.

Web articles – via partners/network co-ordinators. This website and its contents are the exclusive property of ANGA Media Corporation . We appreciate your feedback and respond to every request. Please fill in the form or send us email to: [email protected]
Previous: Natalia Kills X Factor : Swearing X-Factor judge shocks audience
Next: Philip Grandine : Former pastor convicted of manslaughter in wife’s death