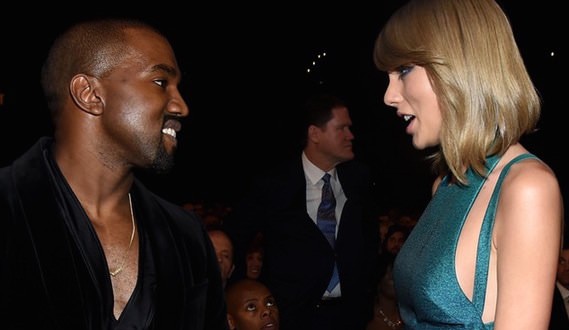 Days after the two were seen posing for pictures, looking friendly and even discussing working together at the Grammys, Swift has seemingly dissed West after not appearing at his fashion show on Thursday February 12 that she was supposed to be at.

“She was supposed to be here today. I don’t know what happened,” he told fashion editor Andre Leon Talley.

Talley noted however that West had a smile on his face, so he probably wasn’t that offended by her absence especially considering almost every other A-lister was front row and center while West debuted his Adidas collaboration during New York Fashion Week.

Those who did come out in support include of course West’s wife Kim Kardashian as well as, Kendall Jenner, Kris Jenner, Khloe Kardashian, Beyonce, Justin Bieber, Diddy, Rihanna and Jay Z- just to name a few.

While Swift hasn’t addressed her absence personally, a source told E! News, “Taylor wanted to attend but had a scheduled photo shoot that day that she could not move,” insisting that the shoot was scheduled months prior.

Web articles – via partners/network co-ordinators. This website and its contents are the exclusive property of ANGA Media Corporation . We appreciate your feedback and respond to every request. Please fill in the form or send us email to: [email protected]
Previous: Police identify murder victim in Calgary’s northeast (Video)
Next: Scientists propose high seas fishing moratorium