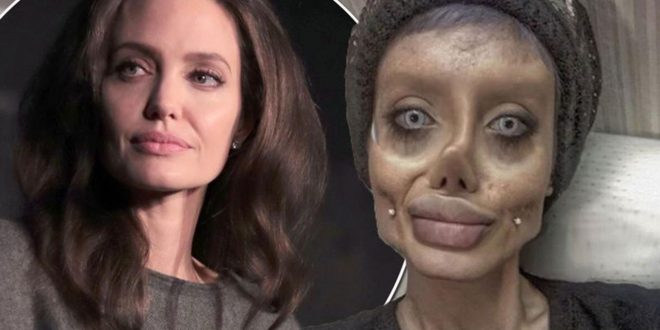 Teen has 50 surgeries to look like Angelina Jolie (Photo)

Teen has 50 surgeries to look like Angelina Jolie (Photo)

A young woman has undergone a shocking transformation to look like glamorous film star Angelia Jolie.

The 19-year-old appears to have had an extreme makeover on her eyes, cheeks and nose, and has dropped to just 40kg in her quest to emulate her idol.

Sahar Tabar claims she’s had the procedures to look like the Maleficent star, and has shared pictures on Instagram where she has 323,000 followers, reports the Mirror.

In one photo she’s covered her brown eyes with shocking white contacts, as she pouts her plumped-up lips for the camera.

The softly-spoken teen said she “would do anything” to look like the actress.

However some people believe her dramatic makeover is nothing more special effects makeup, prosthetics, camera trickery or a spot of Photoshopping.

In a video posted only three days ago to her account, Sahar’s nose doesn’t seem to be so dramatically altered and her cheeks look plumper.

However it’s not clear when the video was taken.

Web articles – via partners/network co-ordinators. This website and its contents are the exclusive property of ANGA Media Corporation . We appreciate your feedback and respond to every request. Please fill in the form or send us email to: [email protected]
Previous: LeAnn Boudwine: woman’s charity nears 10,000 solider care packages
Next: Ashlee Hattermann: 13-year-old Katy runaway found safe in Mexico