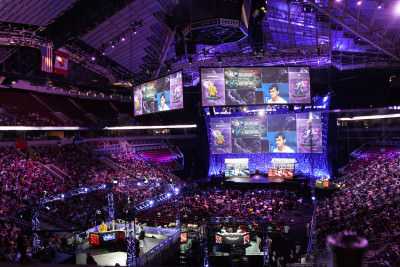 In addition to live hockey and football scores, sports fans can now get similar updates for professional League of Legends video game tournaments, via a new mobile sports app from theScore.

The shares climbed as much as 14 percent to 66 Canadian cents in Toronto, the highest intraday price since October 2012. TheScore, which has a market value of about C$166 million ($132 million), said in a statement that it plans to cover games including League of Legends, Call of Duty and StarCraft.

“ESports is a sport and we want to cover it like a sport,” Chief Operating Officer Benjie Levy said in a telephone interview. “We wanted to create an app to give eSports fans around the world the same coverage and opportunity we give to ‘mainstream’ sports fans.”

Video game competitions, known as eSports, have been expanding as gamers seek to shift perceptions around their craft from a basement hobby to a serious money making industry. The International, a gaming tournament, offers about $11 million in prize money to winners.

While there are many websites dedicated to reporting on eSports, TheScore says it’s the first major sports media company to make a mobile app specifically for gamers.

TheScore reports on sports around the world, letting users tailor their news feeds to specific teams, leagues and players. The company said in October that it had 9.2 million active monthly users.

Video games are a big market for TheScore to expand into, Levy said.

“Globally last year, 71 million people watched eSports,” he said. “Growth is on the right track and moving rapidly beyond a niche audience to a mainstream audience.”

Web articles – via partners/network co-ordinators. This website and its contents are the exclusive property of ANGA Media Corporation . We appreciate your feedback and respond to every request. Please fill in the form or send us email to: [email protected]
Previous: Sarah Palin returns to ‘SNL’, report says
Next: Researchers reveal new sleep requirements for different age groups