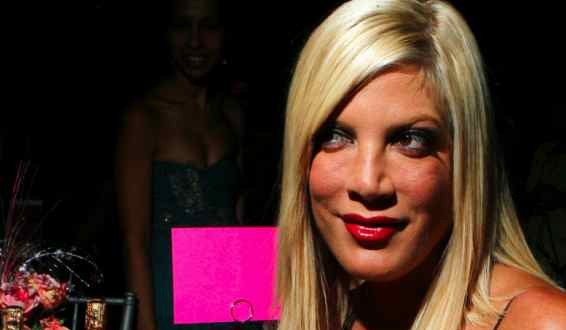 Tori Spelling had several of the symptoms, and got treated like an Ebola patient this weekend when she was hospitalized with a bunch of illnesses.

The former ‘Beverly Hills: 90210′ actress was admitted to the hospital when she had a coughing fit that caused her to lose her breath. US Magazine reports Tori was allegedly admitted for severe bronchitis and pneumonia. Doctors took every precaution when the star was first admitted, quarantining her from other patients until they were able to properly diagnose her.

TMZ first reported the news that the actress was hospitalized, complete with a headline that read: “Tori Spelling Quarantined Like An Ebola Patient.” Thankfully, she has not been infected with the lethal virus.

Tori Spelling has been forced to cancel an upcoming appearance promoting the second season of her reality show ‘True Tori,’ as she is reportedly expected to stay in the hospital through the rest of the week.

Web articles – via partners/network co-ordinators. This website and its contents are the exclusive property of ANGA Media Corporation . We appreciate your feedback and respond to every request. Please fill in the form or send us email to: [email protected]
Previous: Susan Boyle : Scottish singer to adopt a child
Next: James Van Der Beek – ‘CSI Cyber’ : Actor Talks ‘Dark Places Of The Internet’