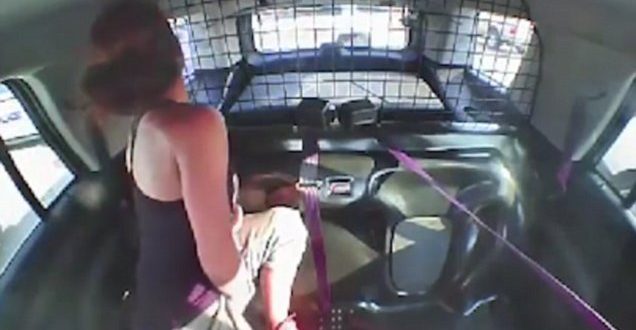 Lufkin, Texas, police responded to a shoplifting call at an Ulta store, chased a woman down and arrested her.

But when Toscha Sponsler, 33, was handcuffed and buckled into the patrol car, something surprising happened. She stole the patrol unit. As officers went through her bags of allegedly stolen goods, Sponsler deftly removed her seat belt, slipped her cuffs and climbed through a window partition about 12 inches wide, to the driver’s seat.

She then led officers on a high-speed chase, weaving in and out of traffic and reaching speeds of nearly 100 mph, according to The Lufkin News. The chase lasted little more than 20 minutes before officers were able to force Sponsler off the road and into a nearby yard.

During the course of the chase, officers in four other police units were contacted and assisted in the proceedings, according to KTRE.

Officers broke the driver’s side window and removed Sponsler from the vehicle before handcuffing her again. The chase ended in a town roughly 20 miles from the point of the original arrest.

Sponsler was charged with felony possession of methamphetamine, according to The Lufkin News, in addition to the litany of crimes associated with the joyride. Officers say they watched Sponsler repeatedly reach for the officer’s shotgun between the two seats, although the mechanical lock kept the firearm in place.

“We are fortunate that no one was hurt during the incident,” said Lufkin Police Assistant Chief David Thomas. “Although we haven’t had anything like this happen in the past, we will conduct an internal investigation to review the incident, for training or tactical deficiencies.”

Following the arrest, officers installed a reinforced partition to keep Sponsler from sneaking through again, according to NBC News.

Sponsler remains in custody in the Angelina County Jail on $18,000 bond. She was charged with five felony counts: escape with the threat of a deadly weapon, aggravated assault, unauthorized use of a vehicle, possession of a controlled substance, and evading arrest.

The police SUV Sponsler stole sustained heavy damage during the chase, particularly when Sponsler was forced off the road and hit a tree, according to The Lufkin News. The police-issued Chevy Tahoe is likely totaled.

Web articles – via partners/network co-ordinators. This website and its contents are the exclusive property of ANGA Media Corporation . We appreciate your feedback and respond to every request. Please fill in the form or send us email to: [email protected]
Previous: Blue-green Algae (Cyanobacteria) bloom advisory issued for Lac Bellevue
Next: Giant Canadian Telescope to unlock the secrets of the universe