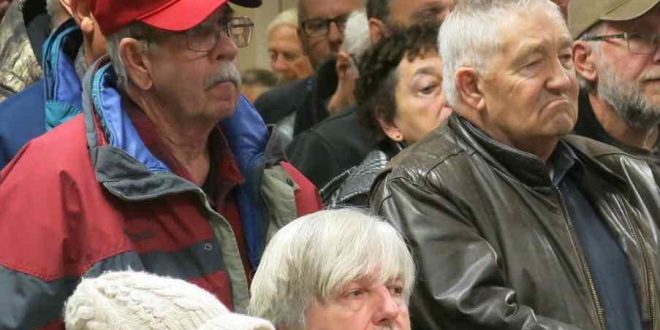 The Beltrami County Board of Commissioners voted Tuesday night to prohibit refugees from resettling in the area — making it the first county in the state, and possibly among the first the nation, to expressly prohibit resettlement.

Only 2 of the county’s 5 commissioners voted to allow refugees.

Spurred by a presidential executive order, county boards across the state met Tuesday to consider whether they should allow refugees to be resettled within their borders this year.

Beltrami County vote mostly symbolic
For its part, the Beltrami County board could have achieved the same result as it did Tuesday night without voting on the executive order. Counties are required to opt in to refugee resettlement. Not voting at all would have been interpreted by the federal government the same as an explicit “no” vote, and wouldn’t have attracted as much attention.

Commissioner Reed Olson said he brought the issue before the board because “it would have been cowardly” to let it pass without taking a stand.

Olson was joined by commissioner Tim Sumner in voting to allow refugee resettlement in the county. Commissioners Craig Gaasvig, Richard Anderson and Jim Lucachick all voted against consent.

The county board’s meeting room in downtown Bemidji was packed Tuesday night. People lined the walls and spilled into the hallway. Most in the crowd appeared to be opposed to refugees: When board chair Gaasvig asked the crowd for a show of hands of those opposed to consent, most of the hands in the room went up.

Several people in attendance were vocal in favor of accepting refugees. But when commissioners said they would not hold public comment at the meeting, attendees on both sides of the issue were angry when they couldn’t speak.

According to statistics from the Minnesota Department of Human Services, no primary refugees have been resettled in Beltrami County in the past five years. Now, Beltrami will not be considered as a possible new home for refugees. In all likelihood, Olson said, the county wouldn’t have been considered, even if it had voted to allow refugees.

“The federal government usually tries to place refugees in cities where there is already a refugee community,” he said, “where there is infrastructure in place to help that community.”

And because Beltrami has not taken in refugees in recent years, the Tuesday vote was largely symbolic, Olson said.

Counties wrestle with resettlement question
President Trump issued an executive order in September requiring states and counties to explicitly approve refugee resettlement starting this summer. State officials say counties will have until June to offer their consent. But agencies that help refugees resettle in Minnesota must submit their applications to the federal government by Jan. 21.

Minnesota attorney general Keith Ellison joined at least a dozen attorneys general in supporting a lawsuit filed by refugee resettlement groups challenging the president’s order. They argue that it contradicts federal law and is unconstitutional. Oral arguments in that case are scheduled to begin Wednesday in federal court in Maryland.

Refugee resettlement agencies have asked the 25 Minnesota counties where refugees have resettled in the past five years to confirm they support resettlement within their borders.

As of Tuesday evening, at least 13 of those counties have voted to continue to accept refugees. They include metro Hennepin County, the state’s most populous, and rural counties like Murray, Blue Earth and Nobles in southern Minnesota.

Several of the 25 counties, including Ramsey County, have not yet taken any action on the issue. Three counties have delayed or scheduled hearings in the coming weeks or months.

While no single entity is tracking resettlement votes across all of Minnesota’s 87 counties, it appears that, until the Beltrami vote Tuesday night, no county in the state had yet voted to ban refugee resettlement within its borders. The Associated Press reported early Tuesday that refugee resettlement groups said they believed no local governments in the country had voted for a total ban on refugee resettlement, though The (Lynchburg, Va.) News & Advance reported that Appomattox County in Virginia “passed a resolution expressing its intent to refuse becoming a refugee sanctuary” in December.

In St. Louis and Stearns counties Tuesday, commissioners tabled the refugee resettlement votes. Commissioners in Stearns said they expected the issue to come up at a later meeting this month. Their counterparts in in St. Louis County delayed the proposal until the end of May, shortly before the executive order is set to go into effect.

Hennepin County Commissioner Jeff Johnson cast the county board’s only vote against continuing to allow refugees to be resettled there Tuesday. He said he was concerned about the cost to the county, where more than 1,300 refugees have resettled in the past five years.

“To me, it’s really important that we have that information before offering essentially a blanket ‘yes’ to this,” he said.

Commissioner Jan Callison said giving people refuge was about more than the economic costs or gains.

“It is that this is the right thing to do,” Callison said. “It is consistent with our history in Hennepin County and the state of Minnesota. And I’m pleased to have a chance to vote for it.”

In Stearns County on Tuesday, some board members expressed confusion about the impact of approving continued refugee resettlement — and the timeline they were given in which to make a decision. Twenty-two refugees were resettled in Stearns County in 2019 — and more than 600 refugees have resettled there since October 2015.

Stearns County Commissioner Leigh Lenzmeier said he was concerned that the county giving its consent to continue resettlement might interfere with existing county programs, and said he’d oppose the issue if he’d had to cast his vote Tuesday.

“I want to explore this more. I think we all got a ton of questions,” Lenzmeier said. although he didn’t allow a presenter from the state Department of Human Services who oversees refugee resettlement to answer questions.

Stearns County Commissioner Joe Perske said board members will always want more information, but that refugee resettlement is an issue that impacts people’s lives, and said he’d support the proposal even if it risked his seat.

“I’m very disheartened that we have this executive order, because it only pins us all against each other, rather than bringing us together,” Perske said.

Web articles – via partners/network co-ordinators. This website and its contents are the exclusive property of ANGA Media Corporation . We appreciate your feedback and respond to every request. Please fill in the form or send us email to: [email protected]
Previous: Pope Francis kisses nun, Pope Negotiates Papal Kiss After Controversy
Next: Ottawa shooting: One person killed and three others injured