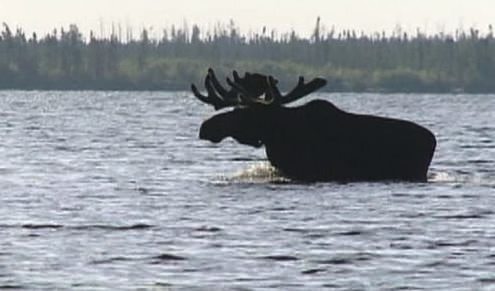 Two women were treated at St. Anthony Hospital in Lakewood for injuries sustained during a moose attack in Gilpin County on Sunday.

One of the women, a 57-year-old, was in the Intensive Care Unit in fair condition. The other woman, Jacqui Boron, told reporters in a news conference Monday at the hospital she has 10 staples in her head, 15 stitches in her leg, four broken ribs and bruises all over her body.

“All of a sudden, I looked up and he was looking right at me and grunted and then charged,” Boron told KDVR-TV. “I tried to get up, and he kept coming back and stomping on me.”

“When I fell back he got me here,” Boron said, pointing to her arm. “Then, when I curled up forward, that’s when he got me on the head.”

The brutal attack left Boron with staples in the back of her head, 15 stitches on her leg, and four broken ribs.

While Divis was briefly stomped on by the moose, she was able to escape and get help.

Following the attack, the sheriff’s office issued a warning to residents.

“If you encounter a moose: walk away from it — DO NOT walk towards it; moose are agitated by dogs; make sure your dog is on a leash, control the dog(s) and walk away,” the warning statement said.

Also this weekend, a woman in Alaska was attacked by a bear on a military base.

The unidentified woman suffered cuts to her neck, arms, and legs. A passerby eventually noticed her and took the woman to the base hospital. Shortly after, she was transported to an Anchorage facility.

“It was very quick, and she didn’t remember much,” Maj. Angela Webb said of the attack and what the woman could remember.

Web articles – via partners/network co-ordinators. This website and its contents are the exclusive property of ANGA Media Corporation . We appreciate your feedback and respond to every request. Please fill in the form or send us email to: [email protected]
Previous: Leila Hatami : Star facing kiss backlash
Next: Canadian kids continue to get failing fitness grade, Report