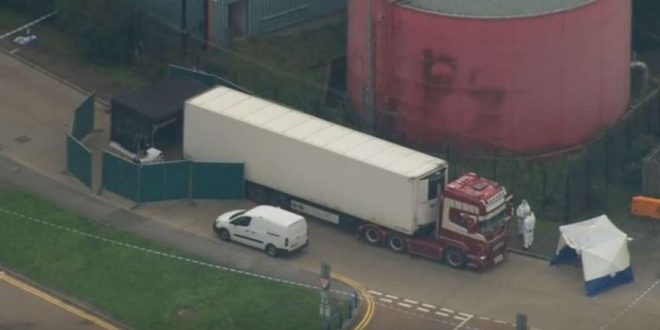 A murder investigation has been launched by Essex Police after 39 bodies were found in a lorry.

The ambulance service was called to Waterglade Industrial Park in Grays shortly before 1.40am this morning. Emergency services arrived and 39 people were pronounced dead at the scene.

Early indications suggest 38 of the bodies belong to adults and one is believed to be in their teens, Essex Police said.

The lorry is believed to have entered the country through Holyhead, Anglesey on Saturday.

Chief Superintendent Andrew Mariner said: “This is a tragic incident where a large number of people have lost their lives. Our enquiries are ongoing to establish what has happened.

“We are in the process of identifying the victims, however I anticipate that this could be a lengthy process. We believe the lorry is from Bulgaria and entered the country at Holyhead on Saturday, 19 October and we are working closely with our partners to investigate.

“We have arrested the lorry driver in connection with the incident who remains in police custody as our enquiries continue. I appreciate this cordon is going to disrupt the activity of local businesses in the area and we will work to ensure that disruption is kept as short as possible. We are working with Thurrock Council to mitigate against any impact our investigation scene will have locally.”

Web articles – via partners/network co-ordinators. This website and its contents are the exclusive property of ANGA Media Corporation . We appreciate your feedback and respond to every request. Please fill in the form or send us email to: [email protected]
Previous: Ynés Mexía: Google Doodle Honors tenacious Mexican-American and explorer
Next: Vampire burial Reveals Efforts to Prevent Child’s Return from Grave (Study)