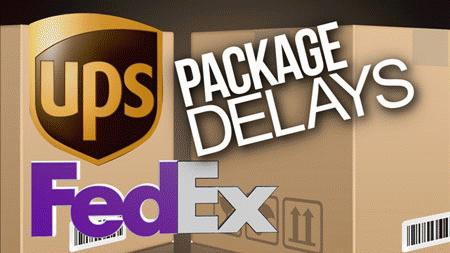 Delivery drivers for UPS and FedEx scrambled to get late-arriving Christmas presents to their destinations Thursday after an embarrassing holiday delay.

Seattle-based Amazon.com said it will offer $20 gift cards and shipping cost refunds for affected customers. Amazon would not reveal how many holiday shipments were delayed nor would the company consent to an interview.

According to UPS, the company’s system was overwhelmed by demand; saying that there were too many boxes and not enough planes. A company spokesperson said the demand was “much greater” than originally forecast this year.

UPS has not said exactly how many packages are late, but they described the number as a “small percentage.”

FedEx is also behind on its deliveries, citing bad weather, an increase in online shopping and fewer shopping days between Thanksgiving and Christmas as the primary reasons. Some FedEx customers were able to pick up packages at their local FedEx Express centers on Christmas.

Both FedEx and UPS will start delivering again today.

Web articles – via partners/network co-ordinators. This website and its contents are the exclusive property of ANGA Media Corporation . We appreciate your feedback and respond to every request. Please fill in the form or send us email to: [email protected]
Previous: News Macy’s bias stop suit, Reports
Next: Texans Linebacker : Jeff Tarpinian Reveals He Had Brain Surgery