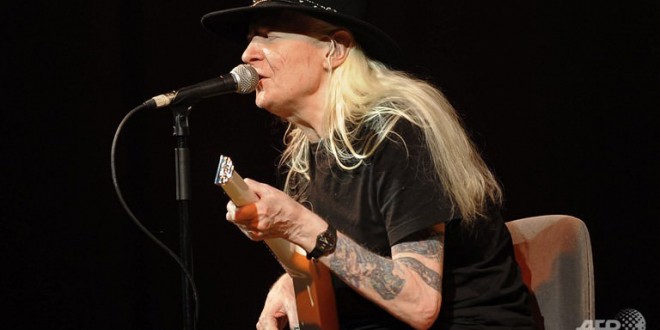 Johnny Winter died yesterday, Wednesday, July 16, at his hotel room in Zurich, Switzerland at the age of 70. The cause of death was not announced but he had seemed to be in very frail health when he appeared in Chicago a couple of times this year.

The strikingly Albino Winter was born in Mississippi but raised in Texas and recorded more than 20 albums, received seven Grammy nominations, and was voted the 63rd best guitarist ever by Rolling Stone magazine.

His friend John Lennon wrote Rock and Roll People in his honour, and Mick Jagger and Keith Richards also wrote a song for him in 1973 called Silver Train.

Winter was the brother of fellow musician Edgar of The Edgar Winter Group and was still performing around 200 concerts a year at the time of his death.

Web articles – via partners/network co-ordinators. This website and its contents are the exclusive property of ANGA Media Corporation . We appreciate your feedback and respond to every request. Please fill in the form or send us email to: [email protected]
Previous: Stuart Scott : ESPN anchor’s cancer battle
Next: Manitoba mountie who witnessed bus beheading dies by suicide