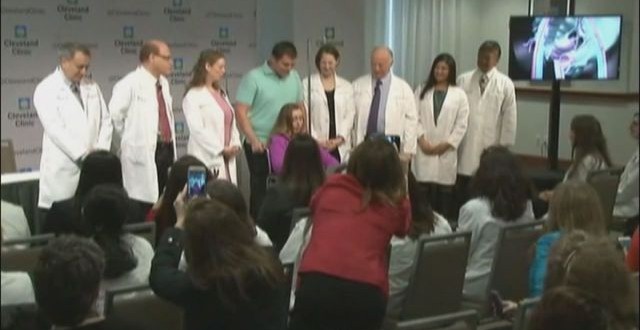 Uterus transplant recipient in US thanks donor, doctors (Video)

Uterus transplant recipient in US thanks donor, doctors (Video)

The woman who received the nation’s first uterus transplant prayed for years to get pregnant, she said Monday, in her first public appearance since the procedure two weeks ago.

“I prayed God would allow me the opportunity to experience pregnancy and here, we are today, at the beginning of that journey.” said the 26-year-old, identified only as Lindsey. “They’ve provided me with a gift I’ll never be able to repay, and I’m beyond thankful for them.”

Lindsey had been told at age 16 she would never bear children, but she received a uterus from a deceased donor during a nine-hour procedure late last month at Cleveland Clinic.

Nine similar surgeries in Sweden (with organs from living donors) have led to the births of five healthy babies since 2014.

“Uterus transplant is not just about a surgery and for moving a uterus from here to there. It’s about having a healthy baby, and that goal is still a couple of years away,” Dr. Rebecca Flyckt, surgeon at the Cleveland Clinic said.

Doctors will wait a year to ensure the transplant is not rejected before Lindsey tries to become pregnant through in-vitro fertilization.

If successful, the transplant could offer alternatives to surrogacy and adoption for the 3-5 percent of women in similar circumstances.

“Despite the name uterine transplant, the focus of this procedure is not on the uterus. It’s on women and children and families,” Dr. Ruth Farrell, OB-GYN, Cleveland Clinic.

Nine more women have been screened for the transplant’s clinical trial, but all eyes are on the first recipient.

The hope is that a transplanted uterus could allow for 1 or 2 pregnancies, with deliveries via C-section.

After the pregnancies, the uterus would be removed so that the mother would not have to stay on anti-rejection medications.

Web articles – via partners/network co-ordinators. This website and its contents are the exclusive property of ANGA Media Corporation . We appreciate your feedback and respond to every request. Please fill in the form or send us email to: [email protected]
Previous: WWE legend Hulk Hogan Takes Stand In $100m Sex Tape Trial
Next: Tim Remington: Idaho pastor shot day after leading prayer at Ted Cruz rally