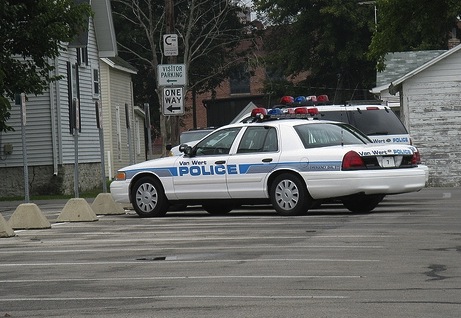 A 47-year-old woman was arrested this morning and charged with murder after allegedly shooting two family members Thursday evening at a home in Van Wert.

Tamera K. Menke of Ohio City reportedly shot a man and a woman at a home at 223 S. Fulton St. and then fled the scene. She eluded authorities until approximately 10 a.m. today when she was arrested at an undisclosed location in Van Wert County, according to city police.

The Van Wert Police Department confirmed the identity of the person killed as Barbara Robinson. A man at the home reportedly was shot in the leg and was in a hospital in Fort Wayne, Ind.. Van Wert Police Chief Joel Hammond has not released that victim’s name pending discharge from the hospital.

At 2 a.m. Friday, Hammond put out a written statement saying Menke was on the run dressed in camouflage and should be considered armed and dangerous. After conducting a search in conjunction with the Ohio State Highway Patrol, Van Wert post, Menke was arrested at 9:59 a.m. Friday by the Van Wert County Sheriff’s Office. She was then turned over to the Van Wert Police Department at 10:14 a.m.

Police received a call at 6:02 p.m. Thursday of a shooting at 223 S. Fulton St. Officers responded to the home and found two people shot. That home is owned by John R. Robinson, according to records from the Van Wert County Auditor’s Office.

The crime remains under investigation.

Web articles – via partners/network co-ordinators. This website and its contents are the exclusive property of ANGA Media Corporation . We appreciate your feedback and respond to every request. Please fill in the form or send us email to: [email protected]
Previous: George clooney : Actor fell out of love with his Tesla Roadster
Next: Missing family: Search begins for identities in Victorville shallow graves case