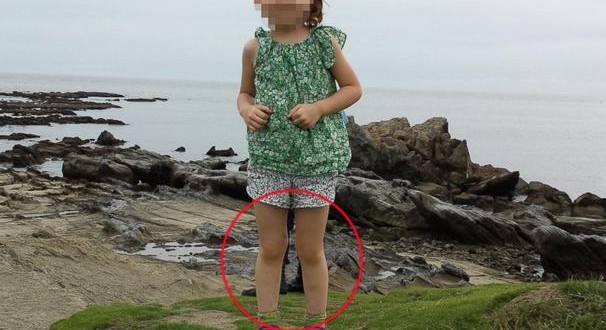 This is what’s happened ever since a Reddit user uploaded the following photo. It features a young girl standing near a beach that’s across from a samurai graveyard.

And if you look behind her legs, you’ll see what appears to be a pair of boots and part of a shirt peeking out from… somewhere.

“My daughter thinks the whole thing is just so funny,” Martin Springall, who snapped the image, tells ABC News. “She thinks it’s a ghost, but not a scary ghost – a nice one.”

The photo was taken last July in Zushi, Japan.

Springall shared the shot with a friend, who uploaded it to the “Ghosts” subreddit.

“Some thought it could be the ghost of a World War II sailor,” he says, not offering up any of his own theories, but making it clear no actual person was there:

“My daughter is really shy, and she wouldn’t have taken a picture if there was someone standing behind her, which I would have definitely noticed.”

Web articles – via partners/network co-ordinators. This website and its contents are the exclusive property of ANGA Media Corporation . We appreciate your feedback and respond to every request. Please fill in the form or send us email to: [email protected]
Previous: Underage driver charged in Oakville crash : Police
Next: Pocket Shark Found : Ultra-rare and ultra-cute