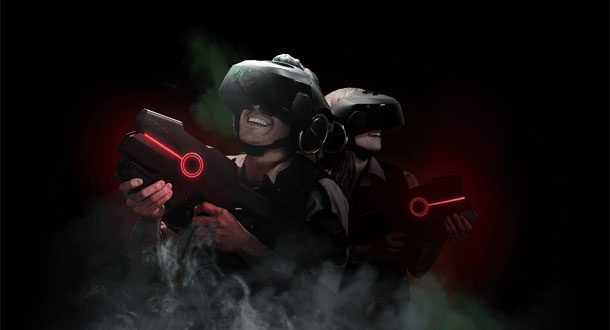 In advance of the July 15, 2016 release of Ghostbusters, one of the most highly anticipated films of the summer, Sony Pictures, Madame Tussauds New York, Ghost Corps and THE VOID have teamed up to bring Ghostbusters to life like never before.

Included in the multi-sensory, all-immersive environment will be Ghostbusters: Dimension, a first-of-its-kind, virtual reality (VR) experience based on the studio’s new Ghostbusters movie.

Scheduled to open to the public on July 1, 2016, the VR experience will launch exclusively as part of the Ghostbusters Experience at Madame Tussauds New York in their legendary Times Square attraction. The construction of this multi-layered and sensory environment is already underway and is designed to fully immerse visitors into the fantastical and spirited world of the new film.

Visitors to Madame Tussauds New York will also be invited to engage with Ghostbusters like never before. The cinematic experience is brought to life with state-of-the-art technology, authentic props, costumes, a vehicle, gadgets and exclusive content designed to spook guests as they move through multiple scenes inspired by the film. After exploring the iconic Ghostbusters Headquarters, guests experience the epic finale, in which visitors take part in a ghost hunt of their own, saving New York City from a paranormal villain. This supernatural encounter will also include figures of the Ghostbusters crew from the new movie, all of whom are prepared to help visitors wage battle against nefarious paranormal activity.

In Ghostbusters: Dimension, developed by THE VOID in collaboration with Ivan Reitman, Paul Feig and Sony Pictures, audiences will experience what it is like to be a Ghostbuster, tracking and trapping a supernatural foe through a New York apartment complex in an environment that combines physical props and sets, real-time interactive effects, and virtual reality technology designed by THE VOID.

“Ghostbusters has an incredible, passionate fan following, and now VR technology allows the fans to become a Ghostbuster themselves within Madame Tussauds New York. The technology is breathtaking, the experience is thrilling, and what better way is there to use VR, than to let audiences inhabit the stories they love,” said Ghostbusters creator Ivan Reitman.

“Who wouldn’t want to answer the call, suit up as a Ghostbuster, and blast their way through a ghost-infested New York apartment with a proton pack?” said Jake Zim, senior VP of digital marketing at Sony Pictures. “We expect this experience will draw fans of all ages to Madame Tussauds and generate a lot of buzz around the release of our new Ghostbusters film this summer.”

“Ghostbusters is an amazing property that has kept fans enthralled for decades, so as we roll out immersive VR experiences around the world, we’re thrilled to have Sony Pictures on board as our first studio collaboration, working with us to develop a truly memorable experience that will have fans talking for years to come,” said Ken Bretschneider, Chief Executive Officer and Co-Founder at THE VOID.

“We are thrilled to work with Madame Tussauds and THE VOID to bring our iconic franchise to life in the heart of New York City. Fans of Ghostbusters will have the opportunity to take a walk through an immersive environment with iconic scenes from the film, and bust ghosts using cutting edge virtual reality technology,” said Mark Caplan, Senior Vice President, Sony Pictures Consumer Products.

Web articles – via partners/network co-ordinators. This website and its contents are the exclusive property of ANGA Media Corporation . We appreciate your feedback and respond to every request. Please fill in the form or send us email to: [email protected]
Previous: Swaddling May Increase the Risk of SIDS, new research says
Next: Alpha Centauri: A Destination for Star-Struck Explorers, Report