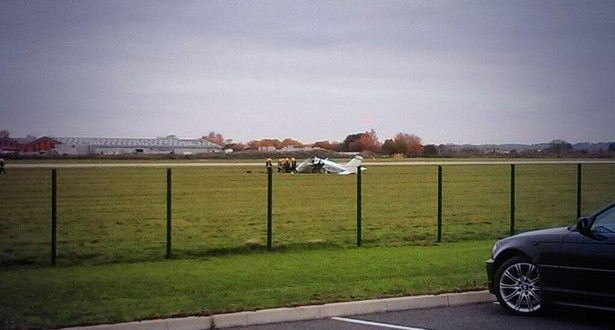 A man was prounounced dead at the scene and a woman was taken to hospital where she later died.

The Air Accidents Investigation Bureau (AAIB) were today leading an investigation into the incident.

A police spokesperson said: “North Wales Police are working with the Air Accident Investigation Branch (AAIB) to establish what caused the plane to crash at Airbus UK, Broughton on Friday, November 15. The AAIB will lead the investigation.”

On-site firefighters from the nearby Airbus Broughton factory were first on the scene to deal with the incident.

Mr Vickers was pronounced dead at the scene and the woman was taken to the Countess of Chester Hospital where she later died.

The AAIB probe will seek to establish the full circumstances of the incident.

A spokesman for North Wales Fire service said three fire engines were sent to the scene – from Deeside, Wrexham and Cheshire.

The Welsh Ambulance Service said it had sent a rapid response vehicle and emergency ambulance to the scene, along with two emergency response doctors.

The runway at Chester Hawarden airport is next to the Airbus factory and manages business and private flights.

A spokesman for Airbus UK said the company was helping investigators piece together what led to the accident.

He said: “We are cooperating with the investigation team and it would therefore be inappropriate for us to comment fully at this stage. It did not involve an Airbus aircraft. The company would like to extend its sympathy to the family and friends of those who lost their lives.”

Airport owner Aviation Park Group Ltd said it could not comment on the crash and referred all queries to the police.

A spokesman for Flintshire Flying School said visibility was good.

“It was at least about 8,000 metres and people were flying.”

A spokesperson for the AAIB said if there is a need for any urgent safety advice to go out to the industry this can be issued within days.

But a final report into the incident could take between weeks and months to issue.

An AAIB spokesman said: “We have been deployed and we are investigating.”

At the time of the crash the weather was cloudy and cold. The airfield is surrounded by farmland, clusters of houses and several industrial estates.

Eyewitnesses told the aircraft “was coming in to land, flipped over and landed nose first”.

Engineer Owen Reid wrote on Twitter: “I was in the car park as it came in and saw the whole thing. It looked bad.”

Karen Hartley, 53, a nurse who lives near the airfield, said: “It’s very, very sad to think two people have lost their lives – what a terrible shock for their families.”

Another resident, who asked not to be named, said: “I’ve worked for Airbus for the past 11 years and I can tell you something like this will be very upsetting for the workforce.”

Web articles – via partners/network co-ordinators. This website and its contents are the exclusive property of ANGA Media Corporation . We appreciate your feedback and respond to every request. Please fill in the form or send us email to: [email protected]
Previous: Singer Tina Turner to relinquish American citizenship
Next: Pamela Anderson’s defends silicone implants : Star Advises FDA