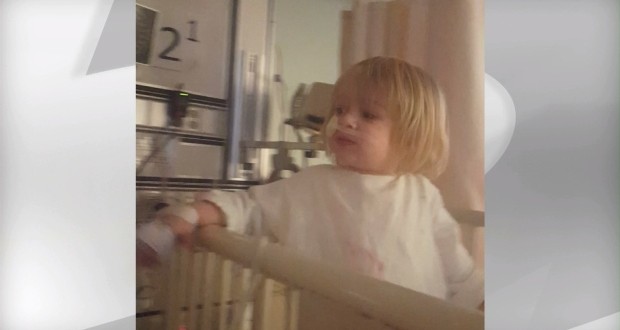 The mother of a Toronto-area toddler says she is quite upset that it took five doctor’s visits before a quarter-sized lithium battery was found in her daughter’s esophagus.

Katie Smith was running around SickKids hospital on Monday morning as if nothing was wrong, but only a few days prior the little girl had a lithium cell battery removed from her esophagus after it was stuck inside her for four days.

Michael Smith, her father, knew something was wrong with his two-year-old daughter when she wouldn’t eat her soup and crackers for dinner exactly a week ago.

Doctors reportedly checked Katie’s throat, ears and airways but ultimately found no signs of an infection.

The family returned home, but the toddler’s symptoms soon worsened. She was unable to eat or swallow, had a distinct odor to her breath, and was extremely lethargic. Her parents took her to a clinic, where she was told she may have the flu.

“Batteries around any children are not safe, especially little toddlers, they are always putting things in their mouth. You cannot keep your eye on them 24/7 but if you know there is something wrong go with your gut instincts, your parental instincts. Do not let up until you get the answers that your need,” Smith warned parents after the incident.

In a similar case, a 1-year-old swallowed a nickel-sized button battery and fought for his life through 65 surgeries before he was finally healed, reports Today.

Web articles – via partners/network co-ordinators. This website and its contents are the exclusive property of ANGA Media Corporation . We appreciate your feedback and respond to every request. Please fill in the form or send us email to: [email protected]
Previous: Organic milk, meat richer in omega-3, New Study Finds
Next: Riversimple unveils hydrogen fuel cell powered car “Video”