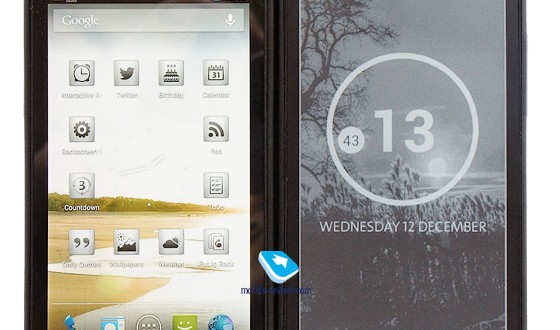 Finally available, YotaPhone is. Introduced last year and shown off at CES in January, the dual-screen YotaPhone is now on sale in Russia, Austria, France, Germany and Spain for €499 ($678 USD). The idiosyncratic Android smartphone features two different displays – a standard LCD on the front, and an E Ink panel on the back.

The idea behind the YotaPhone is that your secondary E Ink display is on all the time, but unlike the more traditional LCD, it won’t suck up a ton of battery power. This allows you to check notifications and read messages, and Yota claims you should be able to get up to 50 hours of reading time with it. I got a chance to see the phone at CES earlier this year – the E Ink display is also helpful if you like to read on your phone for an extended period of time.

Aside from the secondary display, this is a relatively standard Android phone. The primary screen is a 4.3-inch, 720p LCD. And the phone is powered by a 1.7GHz dual-core processor and 2GB of RAM. There’s also a 13-megapixel camera on the back of the phone.

Founded in 2011 to produce mobile connectivity devices for Yota, a private wireless internet provider, the base of Yota Devices’ business is LTE modems and routers, where the company has a worldwide market share of 6 percent.

The YotaPhone goes on sale this month. It will be available in Russia for 19,990 rubles ($600), and in Austria, France, Germany and Spain for 499 euros ($680). Next year sales will begin in the Middle East at a similar price. Currently, there are no plans to try the U.S. market.

“If we really hit the mark then in two to three years everyone will be copying us, and we will be happy” Martynov said.

Artem Lutfullin, editor of mobile-review.com, however, poured cold water on that notion, pointing out that products with similar functionality already exist, such as mobile phone cases with inbuilt electronic paper displays on the back.

Bayram Annakov, from Moscow-based mobile application developer Empatika, said that while the idea of the always-on electronic paper display sounds interesting, it has yet to be seen if the market will adopt it.

“Most likely, the device is not intended to become a smartphone as such, but as a platform upon which to sell applications and services suitable for the back screen,” Annakov said.

Yota Devices’ goal was to create a product that was unlike anything else on the market, and they succeeded, said Lutfullin. YotaPhone cannot and will not compete against the market leaders, he said — it has created a market segment of its own.

Web articles – via partners/network co-ordinators. This website and its contents are the exclusive property of ANGA Media Corporation . We appreciate your feedback and respond to every request. Please fill in the form or send us email to: [email protected]
Previous: One Direction Niall Horan’s Mum Says He Is Not Ready To Settle Down
Next: Joey Prusak : selflessly helps blind customer (VIDEO)