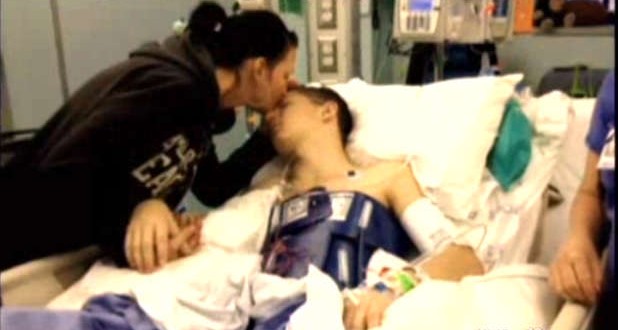 Zack Clements, A 17-year-old in Texas who went more than 20 minutes without a heartbeat after collapsing during gym class said he saw and image of Jesus Christ just moments before doctors revived him.

By all measures, he’s a healthy young man, which is why it’s still a shock that he dropped to the ground during physical education class last week.

“I was running and I had collapsed…not sure why,” he says.

Doctors say it was a sudden cardiac arrest.

His mother, Teresa, was immediately called and even beat the ambulance to the emergency room.

“When they opened the ambulance door he was blue and they were on top of him doing chest compressions,” she said.

“They said I was without a heart beat for 20 minutes,” he said.

Just as hospital staff were ready to make it official, they got a pulse.

Clements was airlifted to Cook Children’s Hospital in Fort Worth and woke up days later. His recovery has been incredible, but even more mind-blowing is the story he tells of what he saw during the time many believed he was dead.

“I saw a man who had long ruffled hair and kinda thick beard, and it didn’t take me long to realize that that was Jesus,” he said.

What is describes is what his family is convinced was a near-death miracle.

“I went up to him and he put his hand on my shoulder and he told me everything would be alright and not to worry…I was just calm and at peace,” Zack Clements recalled.

“For him to wake up and tell us something he experienced like that,” Zack’s father, Billy said. “It’s just you can’t explain it. It’s not humanly possible to explain it.”

His father says accepting his son’s experience as a miracle is the only thing that makes sense.

“That’s what we’re standing on,” Billy said. “It was a raining word from God and we’re going to hold on to that.”

Zack Clements says the experience is something that will strengthen his faith.

“I heard angels singing in the background,” he said.

It may be a medical mystery for doctors, but for this family, there’s no question it was divine intervention.

“I’m just glad he decided to let me have my baby back,” Teresa said.

Web articles – via partners/network co-ordinators. This website and its contents are the exclusive property of ANGA Media Corporation . We appreciate your feedback and respond to every request. Please fill in the form or send us email to: [email protected]
Previous: Passenger Issued Suspension for Drunk Driving : RNC
Next: “19 Kids and Counting” pulled off the air by TLC, Report