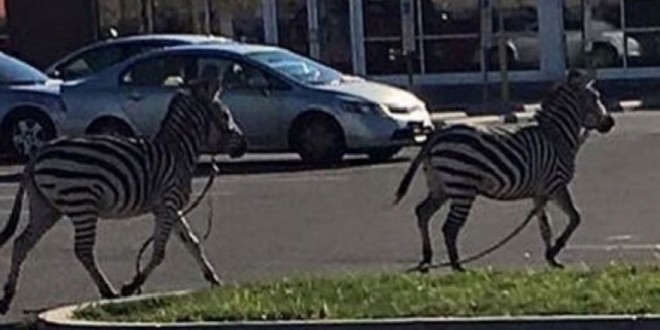 Zebras escape circus, run through the streets of Philadelphia (Video)

Zebras escape circus, run through the streets of Philadelphia ‘Video’

Two zebras escaped from a circus in West Philadelphia on Sunday, leading police on a wild chase for miles through the city.

The pair of black and white striped animals managed to flee the UniverSoul Circus outside the Mann Center for the Performing Arts in Philadelphia, United States, at around 2pm yesterday.

Shocked witnesses took to social media to post hilarious photos and video footage of the animals running loose through the streets before police confirmed their recapture an hour later.

Police took to Twitter to poke fun at their latest prisoners, writing: “Zebras in custody.

“They are already sporting old-timey prisoner getup ahead of trial and sentencing. Have faith, fellas.”

Zebra lassoed by a guy wearing sweatpants. Only in West Philly. pic.twitter.com/KqueEGKImK

No injuries were reported.

Last month, a circus trapeze artist fell into the crowds during a performance at the circus in Philadelphia.

The 19-year-old performer fell about 30 feet (nine metres) after bouncing off a safety net from his apparatus on October 31 and landed among the spectators.

The performer suffered lower back injuries but was expected to make a full recovery. No other injuries were reported.

Web articles – via partners/network co-ordinators. This website and its contents are the exclusive property of ANGA Media Corporation . We appreciate your feedback and respond to every request. Please fill in the form or send us email to: [email protected]
Previous: ISIS threatens Washington, DC. in new video; With Paris-Like Attacks “Video”
Next: Exoplanet HD 189733b Weather Report Reveals 5400 MPH Winds “Research”