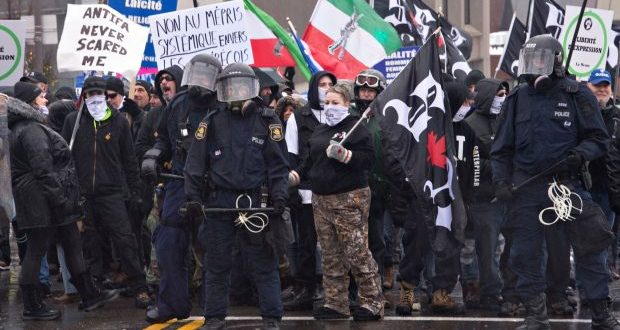 Quebec City police said 44 people were arrested near the site of rival protests by right-wing and anti-fascist groups, according to police spokesman André Turcotte.

These included a first group of 21 individuals who were arrested early in the afternoon for “plotting to counter the protest” that had been organized by right wing groups, he said.

“Weapons were found: telescopic sticks, slingshots, bottles containing a liquid that is for the moment unknown, and in addition their faces were covered,” he said.

The suspects were questioned and could face charges of conspiracy for unlawful assembly and wearing disguise for a dangerous purpose, he added.

Another 23 people associated with the counter protest were arrested later after they failed to disperse, Turcotte said.

No injuries or property damage was reported.

Police say about 1,000 people participated in the two demonstrations.

Web articles – via partners/network co-ordinators. This website and its contents are the exclusive property of ANGA Media Corporation . We appreciate your feedback and respond to every request. Please fill in the form or send us email to: [email protected]
Previous: Sobeys to lay off 800 office workers
Next: Stray Dog Rescues Woman From Mugger (Video)