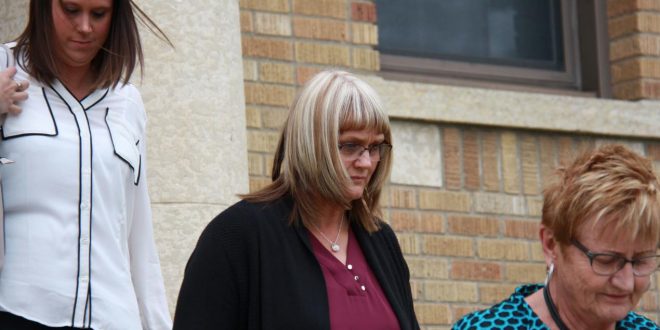 The conspiracy trial for Curtis Vey and Angela Nicholson continues in Prince Albert.

Vey and Nicholson are accused of conspiring to murder their spouses in 2013.

A jury at Prince Albert’s Court of Queen’s Bench was shown video from the RCMP interrogation of Angela Nicholson, who is charged along with Curtis Vey for allegedly plotting to murder their spouses.

The pair was arrested on July 6, 2013 and released on bail a month later.

In the video, Nicholson explained her relationship with estranged husband Jim Taylor. The couple separated in 2009, and in 2010 she said Taylor sent her a Christmas gift which included two knives engraved with their names and an empty perfume bottle with a note saying “dare me.”

Nicholson told officers she was concerned about a possible murder-suicide situation and that Taylor was stalking her.

After intense questioning, Nicholson began to cry and sat hunched over as she told investigators the plan was Vey’s idea. She said his wife would be drugged with sleeping pills, then Nicholson would start a grease fire in the house.

The trial is expected to continue until Friday this week.

Web articles – via partners/network co-ordinators. This website and its contents are the exclusive property of ANGA Media Corporation . We appreciate your feedback and respond to every request. Please fill in the form or send us email to: [email protected]
Previous: Actress Kaley Cuoco Slams Gorilla Killing at Cincinnati Zoo
Next: JetBlue Makes Passenger Change Out Of Short-Shorts (Photo)