Home » Canada » One dead, One in hospital, in Brampton single vehicle collision 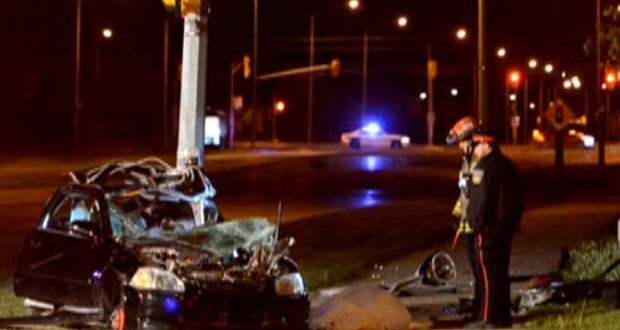 One dead, One in hospital, in Brampton single vehicle collision

One dead, One in hospital, in Brampton single vehicle collision

A male driver was killed and a passenger rushed to hospital after the vehicle they were travelling in smashed into a light pole in Brampton early Saturday.

The collision occurred near Cottrelle Blvd. and Thorndale Rd. around 2:30 a.m., according to Peel paramedics.

Police say that one man, who was driving the vehicle at the time, was pronounced dead on scene. Another man seated in the passenger seat was ejected from the vehicle upon impact, and seriously injured.

Though an air ambulance was called for the injured passenger, he was rushed to hospital by land instead, in critical condition.

It is not yet clear what caused the crash, but the collision reconstruction unit remained on the scene into Saturday morning.

The intersection was blocked off pending a police investigation.

Web articles – via partners/network co-ordinators. This website and its contents are the exclusive property of ANGA Media Corporation . We appreciate your feedback and respond to every request. Please fill in the form or send us email to: [email protected]
Previous: NYC Tells Al Sharpton’s Daughter Do Not Delete Online Photos
Next: Annegret Raunigk : German Woman, 65, Gives Birth to Quadruplets