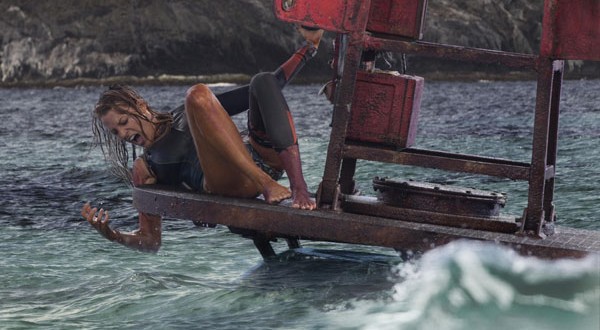 Mia (Blake Lively) was surfing when she was attacked by a shark, her board was destroyed, and she thought she was lost out to sea.

Nancy (Lively) is surfing alone on a secluded beach when she is attacked by a great white shark and stranded just a short distance from shore. Though she is only 200 yards from her survival, getting there proves the ultimate contest of wills.

The trailer begins with trouble in the water and Nancy finding herself hurt in the process. Yelling for help, she is soon to find out that being stranded is not her only problem. “What was once in the deep is now in the shallows,” the tagline says.

Jaume Collet-Serra directed the movie, taking over the job from Louis Leterrier. Anthony Jaswinki wrote the script which entered the Black List in 2014. The project was then described as “a cross between ‘127 Hours’ meets Jaws, with a touch of ‘Gravity’ thrown in for good measure.”

Web articles – via partners/network co-ordinators. This website and its contents are the exclusive property of ANGA Media Corporation . We appreciate your feedback and respond to every request. Please fill in the form or send us email to: [email protected]
Previous: Facebook and Whatsapp to discontinue support for BlackBerry
Next: Scientists have observed changes in Ceres’ bright spots – See pic!