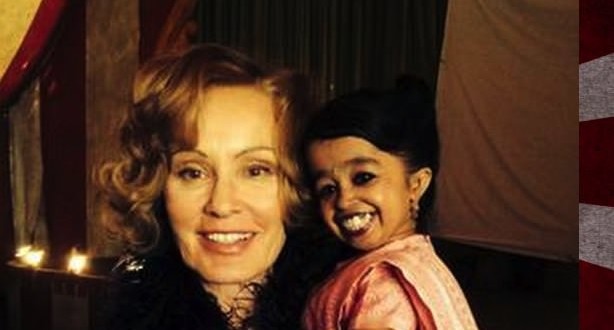 The smallest living woman in the world, Jyoti Amge, will join the cast of American Horror Story: Freak Show this fall.

“Jessica and our newest cast member Jyoti Amge…the world’s smallest woman,” Murphy posted on his Twitter account with a picture of Amge along with the lead star of the show, Jessica Lange.

The upcoming season of the American horror series will be set in the circus town of Jupiter and Amge will play the role of a Greman expat who will be looking after one of the last remaining shows of the country.

Amge, 20, of Nagpur, India is two feet tall and is considered as the world’s smallest woman by the Guiness as well as Limca books of world records. She has already made her debut in the entertainment world through a documentary, “Body Shock” (2009). She was also a participant in the Indian reality show “Big Boss 6”.

“Thrilled to announce the very talented FINN WITTROCK has joined the cast of Freak Show!,” he Twitted.

Murphy and Wittrock have worked together earlier in “The Normal Heart” and “Master of Sex.” The upcoming season of the American horror series will be dubbed in FX in October.

Web articles – via partners/network co-ordinators. This website and its contents are the exclusive property of ANGA Media Corporation . We appreciate your feedback and respond to every request. Please fill in the form or send us email to: [email protected]
Previous: Lye in Utah Restaurant’s Tea Severely Burns Woman, Police
Next: Two Amish girls abducted in Upstate NY