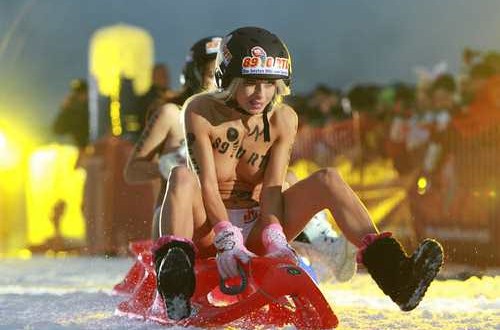 This wild and wintry spectacle sees naked ambition and sporting prowess collide at high speed, as thousands of flesh-hungry spectators descend on the German mountains to watch the selected racers shed their clothes and sled down the slopes.

February 15th 2014:
Taking place in the lively spa town of Braunlage in the Harz Mountains, this infamous race returns for 2014 on February 15th, when huge crowds will turn out to admire the unique sporting spectacle of men and women careering down the snowy tracks wearing nothing but a helmet and their pants. And once the bare-chested racing action concludes you can expect high octane after-parties that make your usual après-ski seem like a vicar’s tea party.

So forget Sochi, these are the winter races that really count. Now the hunt is on to find the two brave souls willing to put their naked bodies on the line for Great Britain, as The Naked Sledding World Championship prepares for a British invasion.
What is it?
As the name suggests, the Naked Sledding World Championship is reassuringly simple – teams of men and women strip off to just their skimpy pants, helmets and shoes, before boarding their sleds in whatever way they see fit and taking on the 89 metre downhill course. You can be sure of some carnage on the slopes too as this is no time trial, all the competitors in each category will be tackling the course at the same time. Chillisauce will pay for your flights and accommodation for the weekend.

Where does the race take place?

Germany has something of a reputation for hosting competitions that border on the bizarre. And so it’s only fitting that our Deutsche brethren are once again rolling out the welcome mat for this celebration of the human form in all its glory.

Braunlage, a spa town and health resort:
Braunlage is best known as a spa town and health resort nestled in the rugged Harz mountains in Northern Germany – and it’s certainly a town that knows how to let its hair down too. Recharge your batteries by day and party by night, while for one action-packed day every year you can get uniquely reinvigorated by the feel of fresh mountain air on your nether regions as you fly down the mountain.

Who will be there?
This is not a race for the shy and retiring among you. While the field itself is a relatively small one – expect there to be around 30 competitors – the crowds are far from small. More than 25,000 gathered slope-side at the last event in 2012, and with a year’s break leaving fans hungrier than ever for high octane nakedness, this year’s event is set to be the biggest yet. Racers gather from various countries, with more than 5,000 applying for the honour of representing their nation at the last contest.

The selection policy seems to be slightly skewed toward those who look good naked, but don’t let that put you off. This year you could have the chance to join them, with Chillisauce launching naked sledding’s first ever Great British team.

Do you have what it takes to take it all off?
So, we Brits have a stiff upper lip do we? Well, we’ll see about that. We can strip off with the best of them and now we can prove it – and capture some silverware to boot. This is a time to cast aside your inhibitions in favour of flying down the slopes for the glory of Great Britain. No longer will this island nation be left out in the cold. It’s time to don your birthday suit, your country needs you.

Web articles – via partners/network co-ordinators. This website and its contents are the exclusive property of ANGA Media Corporation . We appreciate your feedback and respond to every request. Please fill in the form or send us email to: [email protected]
Previous: Glassdoor : Best companies to work for 2014
Next: Corey Knowlton : texas Rhino Hunter Gets Death Threats