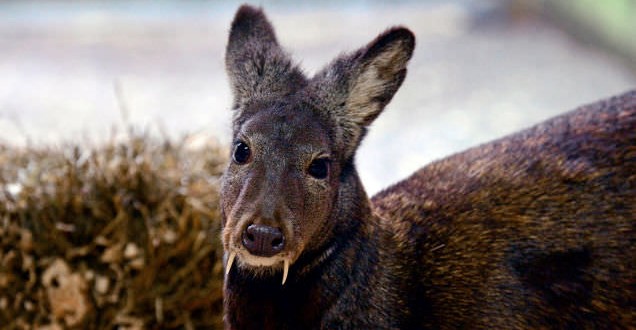 After an absence of more than 60 years, a handful of rare fanged deer have been spotted in Afghanistan — just in time for Halloween. The sharp-toothed mammal known as the Kashmir musk deer hadn’t been seen in the country since 1948.

Male musk deer’s vampire-like fangs are not used to suck blood but rather during rutting season.

But it is their scent glands that have helped contribute to them being listed as endangered on the IUCN Red List – the glands selling for up to $45,000 on the black market.

The WCS team, publishing their findings in the October issue of Oryx, saw one lone male in the same area three times, one female with a child and one solitary female – which may have been the same deer without her young.

It was not possible to photograph the deer however and the above photo is of a Siberian musk deer, one of seven similar species found in Asia.

“This rare species, along with better known wildlife such as snow leopards, are the natural heritage of this struggling nation. We hope that conditions will stabilise soon to allow WCS and local partners to better evaluate conservation needs of this species.”

Web articles – via partners/network co-ordinators. This website and its contents are the exclusive property of ANGA Media Corporation . We appreciate your feedback and respond to every request. Please fill in the form or send us email to: [email protected]
Previous: Tom Cruise, Lindsay Lohan ‘not’ dating : Report
Next: Forest Service: Bear selfie are not a necessity, Warn Nevada Wildlife Officials