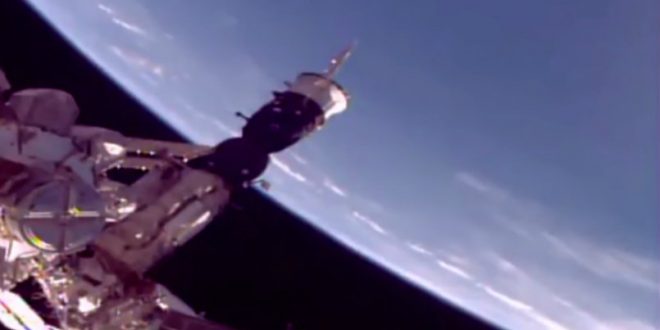 A bizarre video has been posted on YouTube, showing three mysterious circular shapes flying below the space station.

Alien fans Third Phase of the Moon posted a YouTube video based on NASA footage, saying, ‘I’m not sure these are just anomalous clouds – there’s no other ones in the hemisphere.

‘If you look at them closely you’re just not sure. Are they portals of some sort?’

Is this something extraterrestrial?’

Others are a little more sceptical.

Such sightings actually happen with surprising regularity – and NASA has repeatedly said they’re just distortions in the lens, not alien craft parking at the ISS.

Nigel Watson, author of the UFO Investigations Manual says, ‘The constant ‘sightings’ of UFOs near the ISS are mainly due to reflections and space junk, and it is down to wishful thinking that images sent back from the space station are of alien craft.

Web articles – via partners/network co-ordinators. This website and its contents are the exclusive property of ANGA Media Corporation . We appreciate your feedback and respond to every request. Please fill in the form or send us email to: [email protected]
Previous: Mercedes GLC F-Cell: Hydrogen Fuel Meets Plug-In Power (Video)
Next: Ancient human ancestors leapt like acrobats, says new research