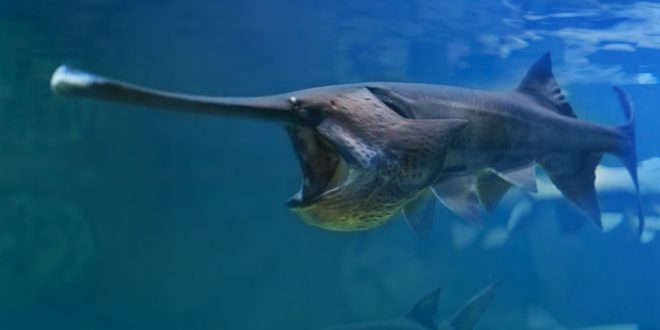 In 2003, researchers from the Chinese Academy of Fishery Sciences captured, tagged and released a female Chinese paddlefish (Psephurus gladius) that had accidentally been caught in the Yangtze River. In just 12 hours, all communication with the fish tag was lost. That was the last time scientists saw a living Chinese paddlefish.

The same team of researchers, led by Qiwei Wei, assessed the species as critically endangered (possibly extinct) for the IUCN Red List in 2009. But the Chinese paddlefish, listed among the world’s largest freshwater fish species with lengths reaching up to 7 meters (23 feet), likely went extinct before that assessment, a new study concludes. In fact, by 1993, the species was most probably functionally extinct; that is, it was unable to reproduce successfully and its population was too small to be significant in any manner, researchers have now determined.

The Chinese paddlefish is, or rather was, a unique species. It was one of only two living species of paddlefish, the other being the American paddlefish (Polyodon spathula), part of an ancient group of fish known to have existed since the Lower Jurassic, 200 million years ago. It was also the only species in the genus Psephurus.

“Given that the Chinese paddlefish was one of the two extant species of paddlefishes, loss of such unique and charismatic megafauna representative of freshwater ecosystems is a reprehensible and an irreparable loss,” Wei, a professor at the Chinese Academy of Fishery Sciences and co-author of the study.

The Chinese paddlefish wasn’t always rare. Historically it occurred across many large rivers that flow into the West Pacific, but since the 1950s it was seen mostly in the Yangtze River, researchers say. There, too, its numbers declined dramatically due to overfishing — estimates put harvests at around 25 tonnes of paddlefish per year during the 1970s — and fragmentation of its riverine habitat. A major death knell came with the construction of the first dam on the Yangtze River, the Gezhouba Dam, which blocked the routes of most migratory fish in the river, including the Chinese paddlefish. The dam split the fish’s population into two isolated groups, and prevented adult fish from moving upstream to spawn and young fish from swimming to downstream feeding areas.

China listed the paddlefish among its protected species in 1989, which meant that it received more attention than many other endangered Yangtze River species. Wei’s team started carrying out smaller, localized surveys from 2002, but no paddlefish was ever seen.

“There was mounting evidence over the years that the species is extinct, since it was not observed for so many years,” co-author Ivan Jarić, a researcher with the Biology Centre of the Czech Academy of Sciences, Czechia, told Mongabay. “After the last survey in the Yangtze was completed and no Chinese paddlefish were observed, the burden of proof about its extinction became very large, and we realized that continued existence of the species needs to be carefully scrutinized.”

The only way to do this was to launch a large-scale survey across the entire Yangtze River basin. So in 2017 and 2018, Wei and his colleagues collaborated with Jarić and other researchers from the Czech Academy of Sciences and the University of Kent, U.K., to investigate the status of the Chinese paddlefish by sampling the main arm of the Yangtze, its important tributaries, and two large lakes, Dongting and Poyang.

By the end of the surveys, the researchers had identified 332 fish species. Not a single Chinese paddlefish was to be found among them.

The research teams also scanned the available literature related to Chinese paddlefish from various published and unpublished databases, and found there had been a total of 210 sightings of the species between 1981 and 2003. Most of these records came from below the Gezhouba Dam. The researchers did a statistical analysis of the sightings and concluded that the species had become functionally extinct by 1993. In the upstream part of the river, the lack of reproduction, driven by the dam blocking migration of the fish, was likely the major reason for the species’ functional extinction. In the downstream section, its numbers fell both due to habitat degradation and because the fish would get entangled in nets meant for other species, the researchers say.

As for the Chinese paddlefish’s complete extinction in the wild, the researchers estimate that it happened by 2005 and no later than 2010.

Could the species have been saved at any point? Perhaps, if action had been taken long before 1993, the researchers say.

“Conservation measures, such as enabling upstream spawning migrations, habitat restoration, fishing moratorium, bycatch reduction, and water pollution reduction were likely to provide the best outcome if they were implemented timely, before the species experienced decline to very low population size, during 1970s, or 1980s the latest,” Jarić said. “In 1990s, after it became very rare and experienced functional extinction, the only solution was to try to capture sufficient number of specimens to establish a broodstock and conserve it ex-situ, until habitat restoration and migration passage problem get properly addressed, but the likelihood of success at that point was already quite low.”

A few attempts to capture live individuals of the species were made in the 2000s, but by then the species was already too rare, and later, already extinct, Jarić added.

There’s always the possibility that individuals of a species declared extinct still survive somewhere, but in the case of the Chinese paddlefish that’s highly unlikely, the researchers say.

As in the case of the Chinese paddlefish, the window of opportunity may be running out for several other Yangtze species. The team’s surveys, for instance, failed to record 140 other species previously reported in the Yangtze basin. Many of these species are highly endangered.

The baiji (Lipotes vexillifer), or Yangtze River dolphin, was last recorded, with photo evidence, in the river in 2002, and has never been spotted again. Although listed as critically endangered, the baiji, too, is thought to be extinct. Other species, such as the long spiky-head carp (Luciobrama macrocephalus) and Sichuan shoveljaw fish (Onychostoma angustistomata), have also not been recorded from the Yangtze in many years, and their conservation status hasn’t been evaluated for the IUCN Red List.

Assessing the extinction risk of all Yangtze threatened species is a gap that needs to be filled urgently, the researchers say. “In addition, the present search and rescue work on other possibly extinct species, such as Baiji and Reeves shad [Tenualosa reevesii], should not be stopped but intensified,” Wei said. “The dead are dead, take care of the species that are about to go extinct.”

The Yangtze River is also a story of caution. The river’s fishery has collapsed, Wei said, with water conservancy projects, pollution, and navigation projects having had considerable negative impacts on fishery yields. “The maximum yield of 427.22 thousand tons was reported in 1954, and the minimum yield of 46.50 thousand tons was in 2011,” he said.

The species of the Yangtze need urgent attention. But extinction isn’t usually seen immediately, and for some species it may already be too late.

“Extinction often occurs with a lag, after the window of conservation opportunity closes, many other highly endangered species in the Yangtze basin have probably already passed the point of no return,” Jarić said.

“Extinction of such a unique, large freshwater species, a relict of ancient fauna that inhabited the Earth for hundreds of millions of years, is a tragic loss,” he added. “Moreover, it shows that we are unsuccessful at preventing extinction even of such high-profile species that were getting a lot of public, research and conservation attention. What chances then all the other highly threatened species have, especially those inconspicuous and unattractive?”

Web articles – via partners/network co-ordinators. This website and its contents are the exclusive property of ANGA Media Corporation . We appreciate your feedback and respond to every request. Please fill in the form or send us email to: [email protected]
Previous: Gavin Newsom homeless crisis, Governor Targets Homeless Crisis in Budget
Next: Fan arrest Boston Celtics game, fan banned from NBA arenas