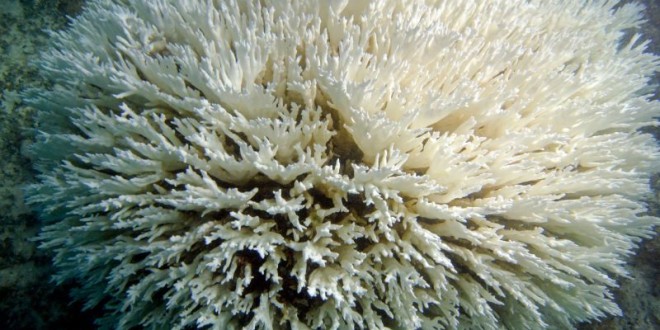 Rising global temperatures combined with an especially powerful El Niño are causing one of the biggest coral reef die-off events ever recorded.

The researchers, who are monitoring and forecasting offsite linkthe loss of corals from disease and heat stress due to record ocean temperatures, report that the global coral bleaching event that started in 2014 could extend well into 2017.

Approximately 500 million people worldwide depend upon reefs for food and to protect coastlines from storms and erosion. Coral reefs provide habitat, spawning and nursery grounds for economically important fish species; provide fishing, recreation, and tourism jobs and income to local economies; are a source of new medicines, and are hotspots of marine biodiversity. Reefs contribute approximately $29.8 billion to world economies each year. In the United States, NOAA Fisheries estimates the commercial value of U.S. fisheries from coral reefs is more than $100 million.

“We are currently experiencing the longest global coral bleaching event ever observed,” said Mark Eakin, NOAA’s Coral Reef Watch coordinator. “We may be looking at a 2- to 2½-year-long event. Some areas have already seen bleaching two years in a row.”

According to Eakin, the length of the event means corals in some parts of the world have no time to recover before they are hit by more bleaching. The current global bleaching event is hammering some reefs repeatedly.

The NOAA coral scientists point out that reefs that bleached in 2015 in the Caribbean and Florida Keys have just started to recover, but may start bleaching all over again as early as July. Eakin also notes that in the Pacific, corals in Fiji’s nearshore waters are bleaching with lots of dead coral for the second consecutive year, and could be worse than last year.

Also, as bleaching events become more frequent, some reefs may not have time to recover. In 1998 in Southeast Asia, severe bleaching was followed by twelve years of recovery that allowed some of the more rapid growing, branching corals to grow back. However, the slower growing corals that build the backbone of reefs did not recover. In 2010, the same area was hit again, killing off newly grown branching corals and many of the surviving massive corals. These reefs may see bleaching again later this year.

“The 2010 Southeast Asia event was only six years ago,” said Eakin. “We’re seeing global bleaching again now. Research shows that the frequency of mass bleaching events is increasing because of global warming. The corals are being hit again and again.”

Coral bleaching happens when corals are stressed by conditions such as high water temperatures. Bleaching occurs when the corals expel the algae that live in their tissues. Without the algae, corals lose a significant source of food and are more vulnerable to disease. In a severe bleaching event, large swaths of reef-building corals die. This causes reefs to erode, destroying fish habitat and exposing previously protected shorelines to the destructive force of ocean waves.

Web articles – via partners/network co-ordinators. This website and its contents are the exclusive property of ANGA Media Corporation . We appreciate your feedback and respond to every request. Please fill in the form or send us email to: [email protected]
Previous: Frank Freshwaters: “Shawshank Fugitive” might gain permanent freedom
Next: Mortal Kombat Secrets Menus Revealed Over 20 Years Later “Video”