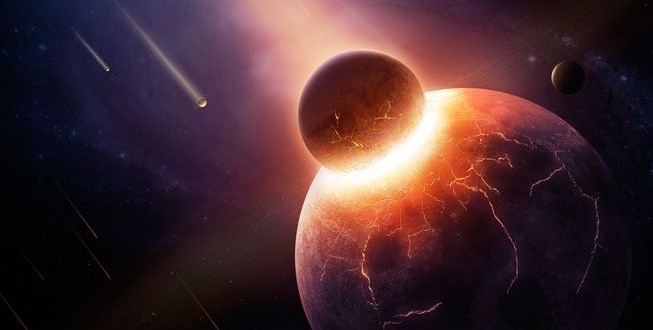 A new study that compared the chemical make-up of the Earth to that of the Moon concluded that our planet may be the result of a head-on collision between two planetary bodies: a proto-Earth and another planet called Theia.

The concept isn’t new; scientists already believed that the crash was also responsible for the formation of the moon. However, UCLA geochemists now determined that it was less of side-swipe collision, but more of a powerful and high-speed head-on assault of Earth and Theia more than 4.5 billion years ago.

Instead of Theia continuing off into space after side-swiping Earth, which has been previously thought, Theia never left the Earth. New evidence published in the journal Science on Jan. 29 reveals the collision resulted in Theia fusing with Earth, which led to the planet that we have today and to the formation of the moon. Theia did not just grazed Earth at an angle of 45 degrees or more; it head-on collided with the relatively young planet with a violent impact.

The team analysed seven lunar rocks brought by the Apollo missions 12, 15 and 17, as well as six volcanic rocks from the Earth’s mantle found in Hawaii and Arizona in the US. The scientists did not find any difference in the oxygen isotopes of the rocks, establishing that the lunar rocks and the volcanic rocks shared chemical signatures.

If Theia only scratched the Earth and produced the moon, the moon would be primarily made of Theia. That would also mean the rocks found in the moon and the rocks found on Earth would have different oxygen isotope ratios. However, the scientists did not find any difference between the rocks.

“Theia was thoroughly mixed into both the Earth and the moon, and evenly dispersed between them,” lead author and UCLA professor of geochemistry and cosmochemistry Edward Young said. “This explains why we don’t see a different signature of Theia in the moon versus the Earth.”

Theia now makes up large parts of the Earth and the moon. If it had not collided with Earth, it would probably have become a planet. Young and other scientists believe Theia was the same size of Earth, while others believe it was smaller, more like the size of Mars.

Web articles – via partners/network co-ordinators. This website and its contents are the exclusive property of ANGA Media Corporation . We appreciate your feedback and respond to every request. Please fill in the form or send us email to: [email protected]
Previous: Researchers claim Europe’s trees causing global warming
Next: San Francisco Police Chase ends with fatal crash, three believed to be dead : Report