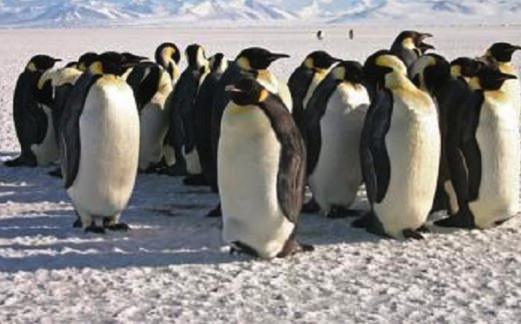 Emperor penguins have shown to be not as attached to their nesting locations as previously thought, meaning that they could adapt much easier to their changing environment, which is being affected by rising global temperatures.

A new study by the University of Minnesota has observed penguins’ movements over the nesting period and found a new colony on the Antarctic Peninsula, which is believed to have relocated.

Researchers involved in the new study found six instances in just three years in which emperor penguins did not return to the same location to breed. They also report on one newly discovered colony on the Antarctic Peninsula that may represent the relocation of penguins.

University of Minnesota College of Science and Engineering researcher and the study’s lead author Michelle LaRue shared her findings at the IDEACITY conference in Toronto on June 20. The study will also be published in an upcoming issue of Ecography, a professional journal publishing research in spatial ecology, macroecology and biogeography.

“Our research showing that colonies seem to appear and disappear throughout the years challenges behaviors we thought we understood about emperor penguins,” said LaRue. “If we assume that these birds come back to the same locations every year, without fail, these new colonies we see on satellite images wouldn’t make any sense. These birds didn’t just appear out of thin air—they had to have come from somewhere else. This suggests that emperor penguins move among colonies. That means we need to revisit how we interpret population changes and the causes of those changes.”

Emperor penguins are a well-studied species and have recently been elevated to celebrity status with movies like “Happy Feet” and the documentary “March of the Penguins.”

The “March of the Penguins” colony is called Pointe Géologie and it’s been studied for more than 60 years. Researchers observe the colony every year and look, in particular, for birds that have been banded by researchers to return to the colony. In recent decades researchers have been concerned about how receding sea ice may affect the emperor penguins that breed on it.

Over five years in the late 1970s, the Southern Ocean warmed and at the same time the penguin colony at Pointe Géologie, declined by half (6,000 breeding pairs to 3,000 breeding pairs). The decline was thought to be due to decreased survival rates. In other words, researchers thought that the warming temperatures were negatively impacting the survival of the species.

High-resolution satellite imagery has changed all that because now researchers can see the entire coastline and all the sea ice. Because emperor penguins are the only species out on the sea ice, they can look at images and identify their presence through the telltale sign—their guano stain. Before satellite images, researchers thought Pointe Géologie was isolated and there was nowhere else for the penguins to go. The satellite images show that Pointe Géologie is not isolated at all. Plenty of colonies are within easy travel distance for an emperor penguin.

“It’s possible that birds have moved away from Pointe Géologie to these other spots and that means that maybe those banded birds didn’t die,” LaRue said. “If we want to accurately conserve the species, we really need to know the basics. We’ve just learned something unexpected, and we should rethink how we interpret colony fluctuations.”

Web articles – via partners/network co-ordinators. This website and its contents are the exclusive property of ANGA Media Corporation . We appreciate your feedback and respond to every request. Please fill in the form or send us email to: [email protected]
Previous: Brandi Glanville : ‘Real Housewives of Beverly Hills’ star Caught Calling Son Horrible Names
Next: Neural tube defects common among Hispanic infants widespread, Study