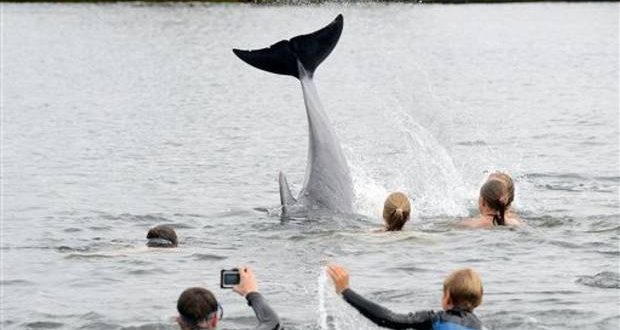 A dolphin has turned up at Kiel harbour and has become very friendly with the local children, taking them for rides on its fins.

According to the German Waterways and Shipping Office, it has often been spotted swimming in and out of the canal that connects the Baltic Sea to the North Sea.

Hundreds of children have swum with the dolphin since Friday, some even taking rides on its back, reports the Guardian.

Visitors say the dolphin is happy to be embraced and to pull people along.

But authorities are warning people not to get too close to the animal, warning that it may feel harassed.

They are also concerned that swimmers are getting in the way of ships using the canal – although the dolphin itself appears to be unfazed by the traffic flow.

The Institute for Baltic Sea Research said it suspected the dolphin had been swept in during the winter of 2014, when violent storms forced about 200tn litres of North Sea water into the Baltic Sea, the biggest saltwater inflow for 60 years.

Web articles – via partners/network co-ordinators. This website and its contents are the exclusive property of ANGA Media Corporation . We appreciate your feedback and respond to every request. Please fill in the form or send us email to: [email protected]
Previous: Can you spot all twelve black dots in this mind-bending optical illusion?
Next: Huge tropical Huntsman spider found in shipping container in UK